I'm no good at parties.

Don't get me wrong--I love to go to a good party.  But when it comes to throwing a party, I am truly out of my element.

When you become a mom, though, organizing birthday parties is part of the job description.

Up to this point, the girls' parties have been pretty general--Play Doh, balloons, some crepe paper streamers, and a cake.  For Katy's 4th birthday, though, she had a theme in mind--her very favorite movie, Cars.

Now, Martha Stewart I am not, so I felt no need for handcrafted decorations and table centerpieces.  I headed to Party City and bought some packaged posters of Lightning McQueen and his cinematic sidekicks, along with some coordinating sticker packs and themed invitations.

I arranged to hold the party on a Saturday afternoon in the largest Sunday school classroom at our church.  Many thanks to my friend Tracy, whose daughter held her party at her church, and demonstrated the brilliance of the plan:  large space, central location, and NOT MY HOUSE!

As the kids arrived, they found red and white balloons all over the ground to kick around and play with (another stroke of genius from Tracy).  There was also a rug with buildings and roads all over it, with toy cars and motorcycles, as well as Cars coloring pages and crayons on one of the tables.

After a little free play time, I asked if anyone wanted to make a birthday crown.  (That has nothing to do with Cars, but who can resist a birthday crown?)  I provided pre-cut crowns and loads of sticker pages to choose from. 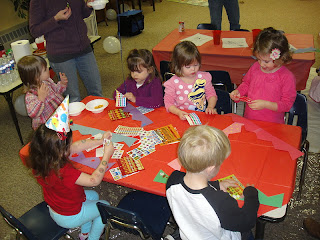 After everyone had a customized crown to wear, I announced our first game:  Pin the car on the racetrack!  My husband showed his true artistic talent in the creation of the racetrack. 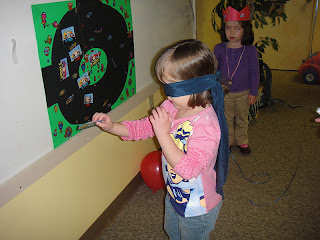 The kids were blindfolded and did their best to tape their car the closest to the Finish line as they could.  Everyone got cheered, and left with a little gold "Winner" medal around their neck.

Then it was on to the bean bag toss. 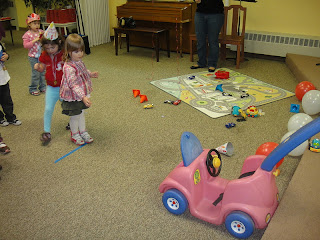 I wanted the kids to toss the bean bags into a tire, but my husband nixed the idea because it throws our car into a tizzy when the spare tire is removed.  He thought of using a little toy push car we keep in the garage.  We opened up the "hood" and the kids gave it their best shot. 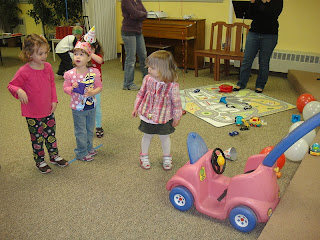 One little girl had a particularly solid shot.  Another little girl was having some trouble, and we found her in front of the car later on, practicing!

We tried some toy car races, but the 4-year-old set was having trouble mastering how to slide the car backward to give it some power to move it forward.  It became a brief free-for-all, and then it was time for cake and ice cream. 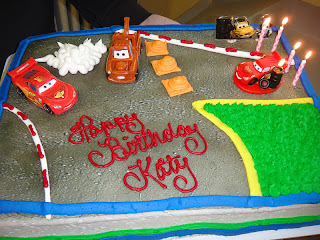 Someone asked if I had made the cake.  Heck, no!  Our local grocery store did a phenomenal job with a Cars-themed cake, and we added our own little Lightning McQueen candle from the party store. 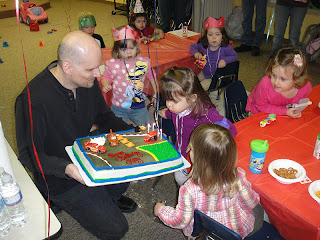 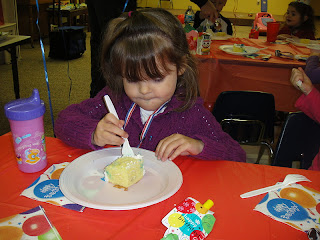 Next came the gift-opening.  The first gift came from the lone little boy at the party, whose father helped him pick out a remote-controlled Lightning McQueen.  Perfect!  Two party-goers gave Katy sets of rubber stamps (do they know her mother OR WHAT?!), and one gave her a sticker mosaic craft kit.  She also got a Tinkerbell doll, lip gloss (yikes!), and an Olivia book. 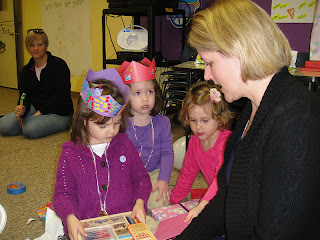 After opening gifts, we played a rousing game of Red Light, Green Light--another appropriately car-related game.  When you play that game with 4-year-olds, it becomes a pack of kids surging willy-nilly between two strips of masking tape, running off all the sugar they have just ingested. 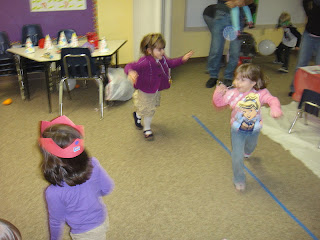 After some kid-created versions of Duck, Duck, Goose, and a game called Monsters, the kids were sent home with favor bags decorated with Cars stickers, containing a Hot Wheels car, a Cars coloring page, a Cars-themed box of four crayons, star-shaped plastic glasses, a whistle, some Fig Newtons, and a bookmark (I'm an English teacher first and foremost, People!). 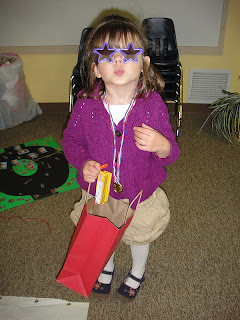 I hope the other kids had as much fun as our two girls did.  I enjoyed seeing their faces during the different activities, and chatting with their parents.  It is such a joy to see your child being celebrated, and handling it with pretty good grace for a four-year-old.

It was a nice combination of store-bought and hand-crafted, and I think it maintained the simple fun of a traditional kids' party without all the exaggerated excess of so many shindigs today.

Many thanks to everyone who through this blog, Facebook, e-mail, and in person helped to celebrate the special day when Katy entered my life!
Posted by Andria

sounds like a pretty nice party, and everyone had a good time, I got a good laugh about the little girl practising.....the cake looked very tasty

What a wonderful memory for her birthday! Great job mom!!

I thought the cake was DELICIOUS, Lee!

Thanks, Tina! (And thanks for commenting!)

I enjoyed reading through your posting. I need to say that it was the 1st article on your blog I genuinely enjoyed and in which I had a feeling of agreement, know what I mean? In any case, keep the posting and I’ll be back once again.

Your style is so unique compared to many other people. Thank you for publishing when you have the opportunity, guess I will just make this bookmarked.

Looks like everyone was having a great time at the party! :]
High-five, Mommy.
Everything looks great *hugs*

I love the idea of pin-the-car-on-the-racetrack! And the little girl with the star-shaped glasses is so cute. Looks like a lot of fun!

Looks like you had a great party! I LOVE the pin the car on the race track idea! Brilliant.

Well,this is the best thing I've read in weeks!
this is going on my blog

Such a wonderful guide about throwing a themed kid's party. It is surely going to be useful for me as well because I would like to host a DIY party for my son’s birthday. Internet is helping me a lot with all this. Recently booked one of the best party venues in Chicago from an online portal.