Never a Boast or Brag

A lot of people in the world think of the United States as a nation filled with braggarts; we are seen as a country full of people who are full of themselves. They snort when they hear the line in one of our favorite patriotic songs: “Every heart beats true under red, white, and blue, where there’s never a boast or brag.” But I have found one subculture within the United States where most of the members work very hard not to boast or brag, and it’s actually kind of a shame. It is the subculture of American Moms.

The “no brag zone” of motherhood is sensed intuitively, and we all seem to be working hard to preserve it. A few weeks ago during my library’s story hour, a woman asked me how old my younger daughter is. Upon finding out that Bayla is close in age to her son, the woman introduced him to me by saying, “My son is four and a half months old, but he’s not sitting up yet.” Her inclination was to share with me only what he CANNOT do. No one would ever say (even if it were true), “He’s four and a half months, and he’s already sitting up.” Can you imagine? The library mothers would surely ostracize her, subjecting her to throat-clearing and eye-rolling when she approached their group when the after-story toys come out. And in my rush to make this woman “feel better,” I quickly explained, “Oh, my older daughter Katy didn’t sit up on her own until she was five and a half months old.” Few mothers would quickly agree that, indeed, her son seemed woefully behind developmentally, sharing several examples of friends’ children who were much more advanced than he at a much younger age!

Is there a way to show our pride in our children without annoying our peers? Why do I feel so odd after I comment that I really like how my daughter looks in her new dress or with her hair styled in a little pony tail? Why does it seem weird to gush a bit when I am struck by just how very much I love my girls? Why are these things that I’m really only “supposed” to say to my own mother, and not to my Mom-friends?

I liked the implied pride of a father at our story hour. He holds his son by the hands and lets the boy stand and take steps while the children sing songs and listen to books. The boy is so little that someone inevitably asks every week, “How old IS he?” to which the proud papa can reply, “Eight months in a couple of weeks.” The boy’s “walking” is impressive, and this father lets the kid’s abilities speak for themselves. Again, no one would ever say, “He’s not even eight months old yet, but he’s closer to walking than a lot of eleven month olds!”

While there are all kinds of magazine articles out there now warning us against praising our children too much, I think the cruelty that is unfortunately present in the day care room and on the playground provides enough damage to our kids’ self-esteem; we, as their parents, don’t need to contribute by focusing on what they cannot yet do. We tell our daughter she looks cute in her summer hat, and is doing a good job learning to recognize her letters, and is working hard to throw a ball farther, and makes pretty lines on the paper when she colors with her crayons. We want her to feel confident and encouraged as she grows up and explores her talents and her interests, and to feel good about her appearance in a society whose impossible standards of beauty seem to grow more unattainable every season. I like her to hear me tell her grandmother about something new that she has said when we chat on the phone. I like her to hear me tell her father about something new she has learned to do when he comes home from work.

I would love to be part of a subculture that doesn’t shy away from telling one another how much joy our children bring to us, along with our inevitable complaints about how they drive us crazy. I would love to be a part of a subculture that feels as comfortable talking about what our children can do, as we feel talking about our worries concerning their development. I hope that moms will grow more comfortable “talking up” their kids, and at the same time will love listening to their friends “talking up” their kids in return.
Posted by Andria 4 comments:

I am happy to report that the creative bug has bitten! When I had Katy, and then again with Bayla, my creative bug went into a kind of hibernation for the first three months of the babies’ lives. It’s a good thing, too, since I wouldn’t have had the energy or time to respond. But somewhere between months three and four, when things start to think about settling into a routine, I get the urge to pull out the paper, powders, and stamps, and explore some creativity again.

Yesterday the girls took some unusually long naps in the afternoon, and I took advantage of the time to make a couple of thank-you cards. 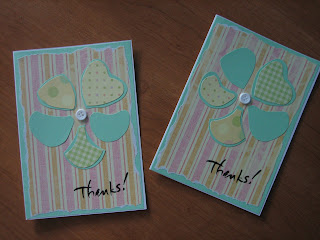 Katy, Bayla, and I have been reading a lot of Bill Martin, Jr/Eric Carle books, including Brown Bear, Brown Bear, What Do You See? and Panda Bear, Panda Bear, What Do You See? Carle’s boldly collaged animals inspired me to use stencils and papers to create the flowers for my cards. I tried something with butterflies yesterday evening, but it didn’t work out at all. I think my creative bug was telling me, “Whoa! Slow down, Mama. Two cards are enough for now. You don’t want to get TOO carried away when you’re just getting back into the creative spirit.” So I put my things aside to go to bed.

I don’t want to count on the girls taking marathon naps EVERY day, but a Mommy can always hope…