In yesterday’s post, I described the first half of my process for creating postcards for iHanna’s international Postcard Swap. Today, I’ll finish the story!

After choosing background papers, as well as papers and pictures to create borders around each card, I looked for ten favorite quotations to include on the cards. I have all kinds of collections of quotations—I’ve been saving favorites since I was a kid—so this part of the process was both easy and fun.

At first, I planned to put the quotations on the cards using a mix of rubber stamping and handwriting. Here are the first two cards I made: 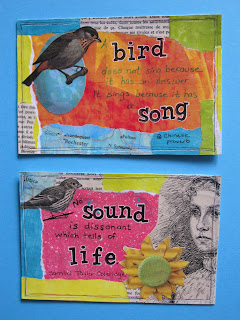 I wasn’t completely happy with the results, and I decided to rely completely on my own handwriting. Scary! I, like so many other people, am not generally a fan of my own handwriting. But I decided to use a black chisel-tip Sharpie, write in cursive, and then outline the letters in white gel pen. For quotations that were especially long, I only did this for select words, writing the rest in regular cursive. After using ultra-fine Sharpies to create loose, free-hand border lines around the edges of the cards, here is the final result for the other eight cards: 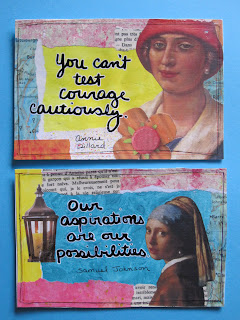 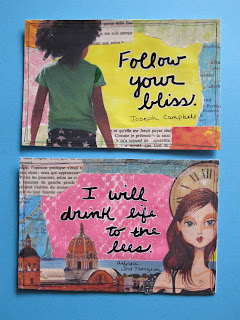 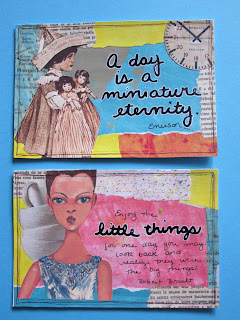 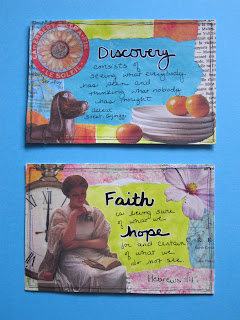 Throughout the process of making my postcards, I kept reminding myself to leave time for “the boring part”—that is, the back of the cards. I kept thinking of it as “the boring part”! But once I decided how I wanted the backs to look, and started stamping, I liked the simple, clean look of them almost as much as I liked the busy, colorful front sides. I created the backs on separate pieces of 4”x6” cardstock, and then glued them to the first parts of the cards that I created. 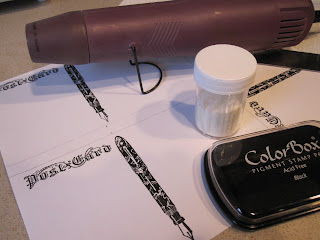 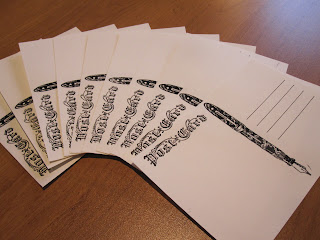 Now the postcards are finished, and I am ready to write my messages on the back and take them to the post office. Four of the cards will then be on their way to Canada, four will move along to other places in the United States, one will head to the UK, and one will go to the Netherlands. And I will await the arrival of ten works of art from around the world right in my mailbox! 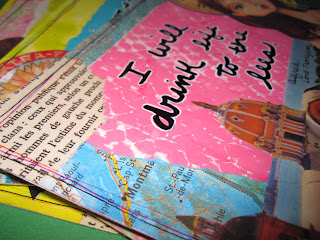 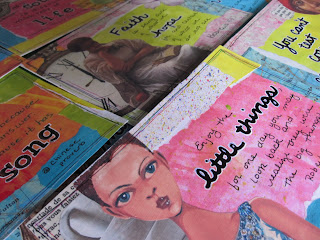 Your post cards are awesome!! You did a great job.

Love them. Still putting finishing touches on mine. Hopefully before the end of the weekend

These are great! I love the way you did the backs. Where did you find those stamps??

Your handwriting is what makes the postcards awesome to me, it looks so great and something I think many receivers will put up on the fridge or inspiration board!
I too dig the back, love the pen diver - very fun idea!

Thank you so much for the comments! Janet, I don't remember where I got the stamps, but the fountain pen stamp says "Marks of Distinction" and the postcard stamp is "Inkadinkado". I've had them for a long time, but they haven't gotten any use until now!

These postcards are absolutely beautiful, Andrea!!!
The handwriting makes it authentic....and the back is so unique...

your postcards are amazing, the colour the words, your writing is perfect.

Your cards turned out gorgeous! I hope I'm on your list ;-)

Loved how your cards came together. Thanks for sharing your process!

You shouldn't be afraid of your handwriting any more - it's unique and it's yours. Your postcards turned out nicely!

Your postcards are great! Did the postman really say they were crap?
I can't believe it!
I loved your journal pages too :)

No, "scrowlscrowl", the postman didn't really say that (that would have been devastating!); I just imagined that it might happen. Thankfully, it did not!

You sure chose thoughtful and concise words for each card perfectly!!

Your text made the cards come so well together.

These are simply beautiful!
Love all the details you added to your postcards :]

thanks you the article really helped me. I hope the articles that are made are useful for all of us.

thanks, his article is very helpful