As I mentioned in a previous post, I am taking part in my first art swap ever, making ten postcards to send around the world, and awaiting the arrival of ten postcards in return. This is all thanks to iHanna's inspiration and organization!

As I have worked on my postcards, I have documented the process in photos, which I will share in two separate posts.

First, I gathered background papers that I had created with acrylic paints, and cut them into ten pieces that were each 4”x6”. 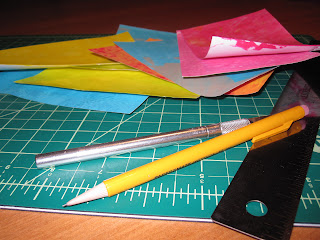 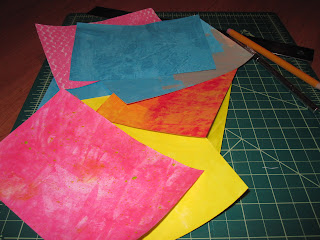 Then, I cut and tore pieces from my same stash of colored background papers, along with pages from a book written in French, to make borders around my postcards. 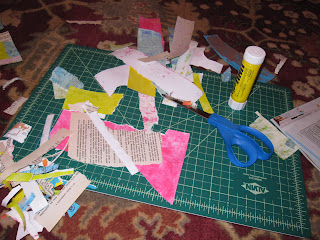 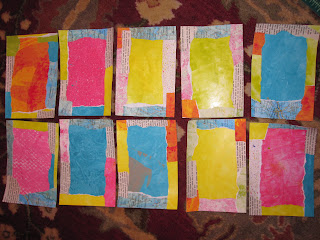 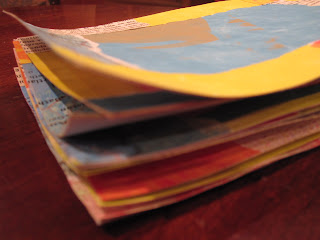 Next, I went through my files of pictures from books, magazines, and catalogues, and added images around the borders of the postcards. This, to me, was the “funnest” part of the process. 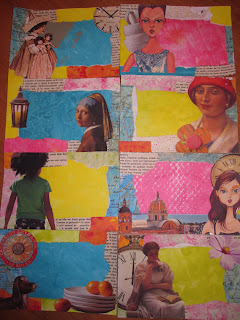 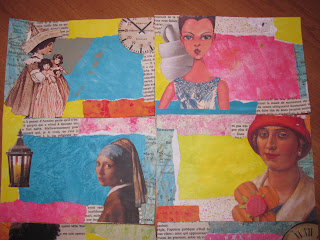 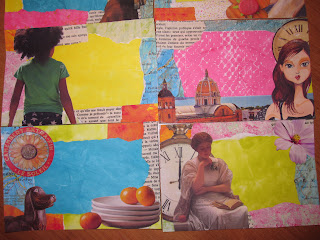 Tomorrow, I’ll show you what I did with the inner space of the postcards, as well as the backsides!
Posted by Andria

They look great! And I like that you are showing your process. I wish I had thought to do that with mine.

These are seriously cool. I hope I get one of yours (but then again I hope that of about every card I have seen so far, so that may not work out, haha). Thans for bookmarking my blog, I really appreciated your comment as well.

The "funnest" part in this swap is seeing all awesome creations and reading about how they are created I think. Love your colour and image choices!

Love how colourful your postcards are! They all look gorgeous!

Thank you for the comments. I think one of the best parts of the swap is having new visitors to my blog! I hope you'll "drop in" again!

I'm still working on my cards...yours look fantastic!! I liked how you showed the process you went through to make them...maybe I'll get one of yours...I have a 1/2800 chance. I'm off to look around your blog.
Mary

Wonderful postcards! So fun and colorful!

Wow I love these colorful babes peeking onto the postcards from the borders. Beautiful!! It's so fun to see what all the swappers got up to... Best wishes from germany, tj

Lovely texture on the background. these collages looks so neat.