Field Trip to a Museum of Everyday Life

I am returning from a much-needed month-long blogging-break.

For the first two weeks, I sat around feeling guilty for not posting, worrying that I would never again have a readership, and oh-so-humbly imagining that people felt lost without accounts of my creative endeavors.  (Well, the first two anyway...)

For the second two weeks, I enjoyed the freedom to pursue life without thinking about how things could be framed for a blog post!

My creative life has continued apace over the past month:

I participated in my one-and-only craft show of the year: the Artists United Multi-Media Festival held at the Performing Arts Complex in Wallingford, PA.  I have had my work accepted for display at a local coffee shop (more about that later!).  I have added homemade body wash to my DIY apothecary, which currently consists of elderberry syrup to fight colds and flu, as well as homemade deodorant.

I created a "spell book" to go along with my daughter's Hermione costume for Halloween, helped my mother move close by and get settled in to a new home, and have almost completed the hunt for the perfect Christmas present for everyone on my "nice list."

I continue to meet twice a month with my Living Stones Women's Ministry, every Thursday with my church's Women's Bible study group, and most Sunday evenings with our Youth Group for grades 6 to 12.

I've gone to Harry Potter Days in Chestnut Hill, PA, Trunk or Treat at my kids' school, and been a guest reader in my daughter's classroom.  I enjoyed Thanksgiving dinner with my mother-in-law and the rest of the family at her assisted living facility, and still made a few favorite dishes (like pumpkin pie!) for us to enjoy at home.

And, I've been painting and gluing and paper-stitching up in Studio 791.  (There will be more about that soon, too!)

The building looks more like a castle, rising six stories, but giving the feeling of being even taller.  It was built by historian, architect, builder, archaeologist, and tile-maker Henry C. Mercer, who lived until 1930.
He noticed that as people relied more and more on machines, the hand tools and vehicles of earlier days were being discarded and in danger of being forgotten.  He began an incredible project to collect, assemble, and label a huge selection of these soon-to-be-obsolete handmade objects from pre-industrial America.

According to the official museum web site, Mercer gathered almost 30,000 items and created his own system for organizing and categorizing them.  He built the concrete castle known as the Mercer Museum in 1916.  Remarkably, he didn't just have the idea for the museum, but he built it himself with the help of eight day laborers and a horse!
There is an extremely high central court within the museum building where the largest objects are hung, suspended above the center--boats and stage coaches and wagons. 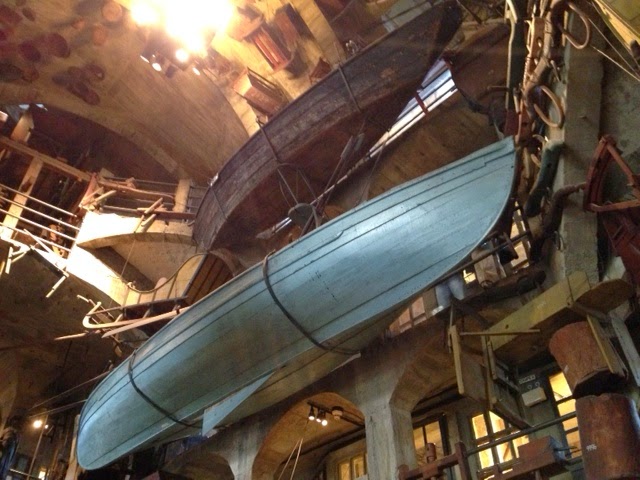 Visitors take stairs to wind their way around every level, peering into windowed rooms--what the web site aptly calls "a warren of alcoves, niches, and rooms according to Mercer's classifications"--to see hand tools related to medicine, candle making, tin-smithing, printing, dairying, hat-making, clock-making, shoe-making, needlework, and dozens of other enterprises that supported daily life in the 19th century and earlier.

The museum clearly communicates Mercer's belief that "the story of human progress and accomplishments was told by the tools and objects that people used."
As one of the many placards around the museum explains it:


"Henry Mercer was one of the first to recognize that today's junk becomes tomorrow's historical artifact.  He knew that every object represented some human value or activity, and believed that traditional historians had overlooked objects in their study of the past...Mercer saw that ordinary people also made history in their everyday lives. Such anonymous history might be better understood through the tools and products they made and used."


As a life-long student of history, I found Mercer's collection fascinating for what it has to teach us about pre-industrial America.  As an artist, my creative well was filled to the brim with amazing shapes and imagery.  And as a human being, I really admire Mercer for his capacity to envision such an ambitious project and see it through so spectacularly to its completion.

I would heartily recommend a field trip to this extraordinary museum of everyday life!

My mother had a brochure about this place in her collection of paperwork that I have been sorting through. I thought this might be a cool place to go and maybe even to photograph. I'll like to hear more about it when we see each other again in person.

You certainly know how to stay busy with a wide variety of activities -- no boredom in your life! I'm excited at your chance to display your art to a wider audience. (Also very grateful for all the time you've shared in helping me get settled!)

You HAVE been busy! All sounds good. Interesting museum too....

thanks for stopping by, and you have been busy, those printer trays are to die for.......
lee

A blog break is often necessary and it sounds as if you used yours perfectly. But it's good to have you back in Blogland. You were missed.

I wish I could visit that museum. I love old tools and things from the past.

Welcome back! That museum looks like a great place to hold a sketchcrawl, seems like there is so much to draw. The building itself looks beautiful too. All in all a feast for the eyes.

And on another note...Harry Potter Days? Where can one sign up for those? ;-)