Illuminated Letters at the Library 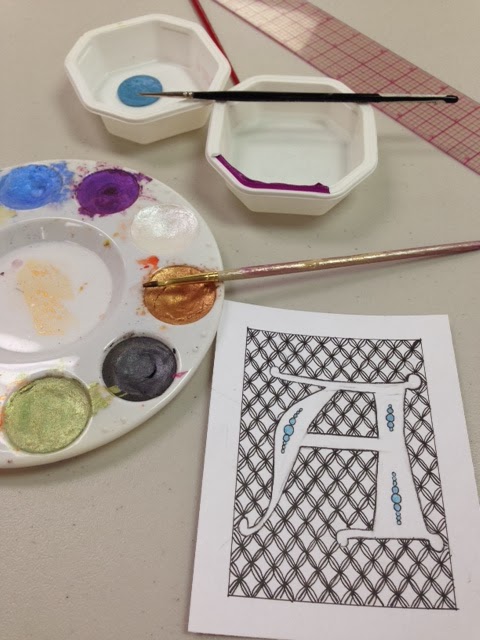 One of my local libraries offered a free workshop this afternoon on creating illuminated letters, similar to the kinds you might see in the medieval manuscripts of monks transcribing the Bible.  How could I pass up the opportunity?
Our teacher was Tracey Massey of the Philadelphia Calligraphers' Society.  She explained that calligraphy enjoyed a resurgence in interest and popularity in the 1970s, but is now "sort of a dying art."  The Society is reaching out to the public to try keep their organization and this beautiful art form thriving in our area. 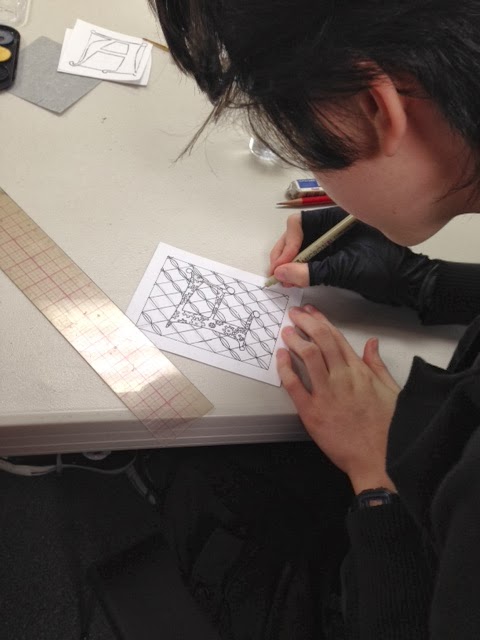 Tracy had prepared two letters for each of us who registered for the class--the initials of our first and last names.  She also provided paper, Micron pens, pencils, transparent rulers, colored pencils and pens, and watercolors.  She had everything we could possibly need to create beautiful versal letters. 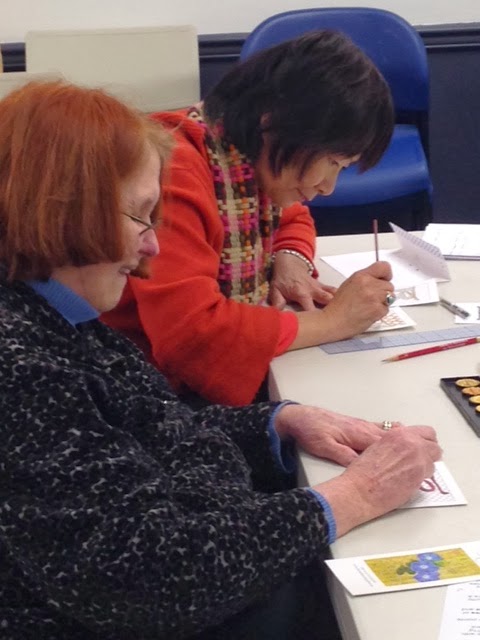 To create our own letters, we placed a small square of carbon paper face-down on plain white paper (which felt basically like Bristol paper in weight and surface smoothness to me).  We then placed the prepared letter (something you could find online or in a calligraphy book) on top of the carbon paper and traced over it with a pencil.  The carbon made an impression of the letter on the white paper.

(Note:  Tracy told us that Saral Transfer Paper works much better than regular carbon paper, but she didn't have any for us to use today.  It is apparently available at craft stores like Michael's and AC Moore, along with art supply stores.) 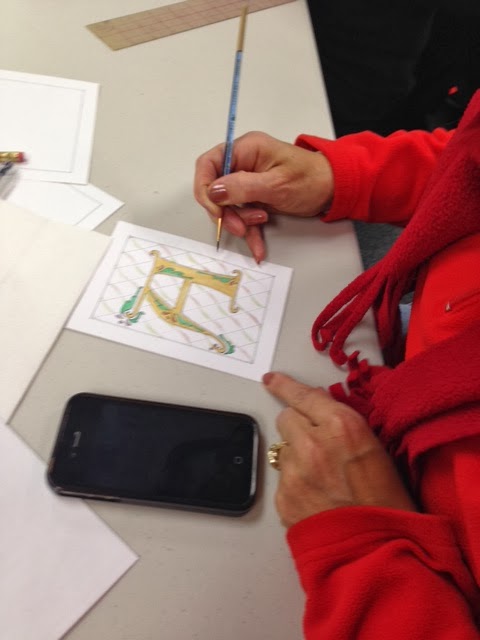 We then went over the lines of the letter with black ink.  Next, we created the diapering around the letter.  As funny as the term sounds, it simply means creating a repetitive geometric pattern.

For our letters, we created lines that criss-crossed on the diagonal, and then were free to decorate them further as we chose.  I used the simple tangle pattern you can see in the photo above.  Then we were left to decorate the inside as we chose.  I used a pattern of small circles, which I painted with an iridescent blue watercolor, and then painted in the rest of the letter with gold.

You can see my final result here (left column in the middle), along with some of my classmates' work: 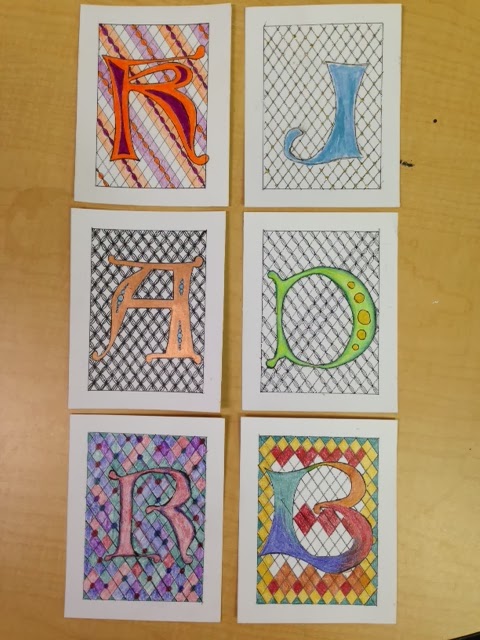 Now I have the letter K to work on at home!

I think that anyone who enjoys drawing, lettering, and creating Zentangles and other doodles would have a great time giving this kind of project a try.  If you are looking for new sources of art supplies to purchase (ha!), Tracy recommended the following two sites for calligraphy supplies:  John Neal Bookseller and Paper & Ink Arts.  They look pretty fabulous for those of us involved in painting, doodling, and bookbinding, as well!

That looks like a lot of fun! What a great way to get some artsy time...

Those old illuminated manuscripts are just gorgeous. Worth knowing how to do it and you all made a good fist of it.

What library offered such a class? Do they have others that they offer? I'd keep my eyes open if they did. Looks like it was fun.

That looks like such fun! I would definitely have joined you if I could.....

That looks like so much fun to try! You letter looks very shiny! ;-)