An essay by Ann Percy explains:  "...the best outsiders produce work that is, variously, out of the ordinary, edgy, visionary, imaginative, proselytizing, obsessive-compulsive, or popular-culture-driven, often raw or crude in execution but also masterful in color choices and composition."

***************************************************************
I am already a huge fan of James Castle's work.  Philadelphia had an exhibit of his work alone a few years ago, and I was enthralled by both his biography and his body of work.
Castle was born deaf in 1899, and never acquired language--never speaking, writing, or reading.  And yet he created hundreds of hand-bound books, and incorporated all kinds of text and graphic imagery, making use of food cartons, cigarette packs, matchboxes, envelopes, and other "detritus" as his art materials.  Much is made of his technique for mixing soot and spit, and applying the mixture with sticks to create many of the lines in his pieces. 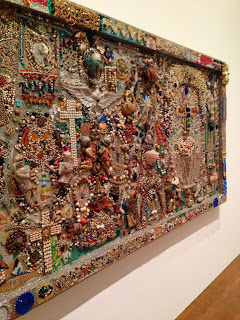 The artist also created the wooden frame as an extension of the art inside, a feature of some of his other works as well.

Blagdon's mother died of stomach cancer, and his father died of lung cancer, so he spent the last 25 years of his career trying to ward off disease with this creation.  His plan was to channel the earth's electromagnetic energy for its healing powers.  He built more than 600 segments like these three in a shed on the farm where he lived.  Sadly, Blagdon died of cancer himself in 1986. 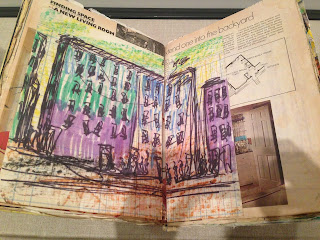 I am going to end my first post about the art show with the Artist Books of Purvis Young.  Several of his books were displayed in a glass case (hence the shadow of my hands holding my iPhone in the picture above!). 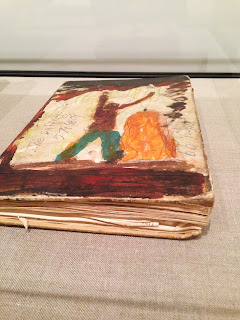 Young never went to high school, and spent time in a Florida jail as a young man for breaking and entering.  In jail he began making art, and dedicated his life outside of jail to improving his community. 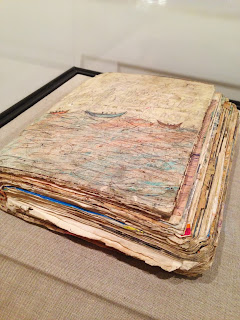 Young used old library books and magazines for his artist books, and drew or pasted his own imagery over top of them.  Sounds familiar, doesn't it? 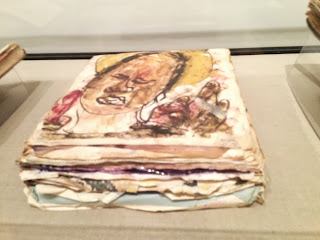 I walked out of this exhibit feeling the same way I did after seeing James Castle's work a few years ago:  honored to have had the opportunity to see this work, and fascinated by the unorthodox lives and styles of all of these people.

Everything in this exhibit appealed to my own personal aesthetic (well, maybe not the chicken bone sculptures right at the entrance, but that's another story!), and I have such respect for the people who created these pieces with such pure intentions--to honor their divine calling, to save the lost, to beautify their communities, to heal the sick and dying, or simply because it was WHO THEY WERE, their very identities.

No other word but "spectacular."

ohmygosh... I have to get to this exhibit!

Wow - this looks like a great exhibition. I especially love the Simon Sparrow assemblages - just amazing!

I've always liked collage work like Sparrow's with such eye-popping items that usually get ignored. But am completely amazed by Castle's work -- he may not have had normal outlets for expression but it didn't hinder his beautiful imagination. Goes to show that an artist can be whoever wants to be one.

Wow, Andria. When I think about all the great work being done by 'outsiders', people who just love the act of creation, it is overwhelming! I have never heard of these artists and am so glad you talked about them. There's so much good out there, isn't there?

Hi Andria...What an exhibit! I love outsider art! Think of the time that Sparrow spent to create that long mural. Thanks for sharing your visit to the exhibit.
Mary

I'm obviously in love with Simon Sparrow's pieces. So wonderful. Outsider art is a really great thing. I'm glad you were able to take pictures!

Thanks for taking us along to the museum and for sharing these artists. I would love to be able to see this exhibit in person...especially the art journals you showed at the end.

Thank you for posting this. I'd never heard of any of these and love the Sparrow and Young works - but what sparked me most was James Castle's work - I've been sat here going through google links about him and am amazed.

Wow...you just have soooo many COOL places to see art. I wish we had that around here!!! So very inspiring:)

Thanks so much for my postcard...I can't remember if I thanked you...it lifted me up on a rather down day!! It is now on my studio wall. I appreciate your friendship so much!!!