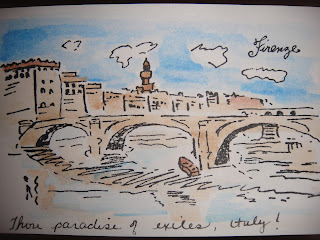 ICAD #41:  Firenze
This rubber stamp might be the prettiest one I own!  I stamped it with Staz On black ink and used my waterbrush with watercolor pencils to add some browns and blues to the scene.  The quotation at the bottom ("Thou paradise of exiles, Italy!") comes from Percy Bysshe Shelley. 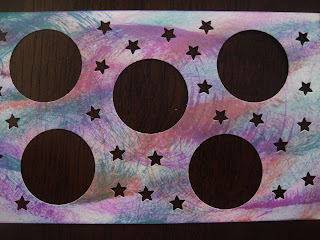 ICAD #42:  Negative Space
I used my punches here for the first time during the ICAD challenge.  There's not much index card left after I took my circle and star punches to it!  The background was colored with a mix of smeared alcohol inks. 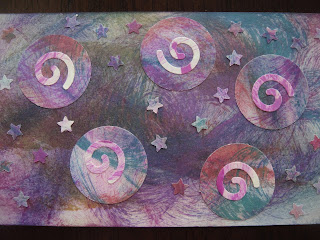 ICAD #43:  Positive Space
I took the punch-outs from yesterday's card, along with some punched swirls to create this card--kind of the opposite of yesterday's.  This background was also colored with a mix of smeared alcohol inks. 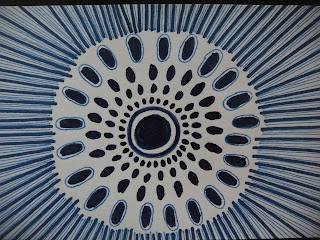 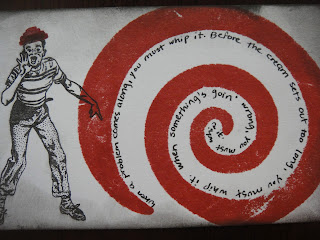 ICAD #45:  Whip It
One of the songs on my Shuffle while I run is "Whip It" by Devo.  (I highly recommend it, by the way; the beat is a perfect pace for jogging!)  I thought up this card, as a matter of fact, while jogging!  The swirl is a foam stamp, stamped with Fired Brick Distress Ink.  The boy is stamped in black pigment ink, and I drew in his little Devo hat with a pen.  I added the song lyrics from "Whip It" in the spiral: 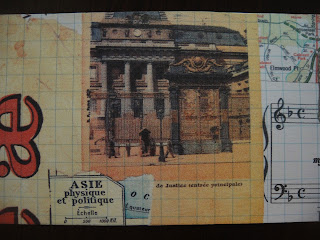 ICAD #46:  Collage Page I
A recent project has been to create some collage pages; I'll blog about it soon so you can see what I did (and why I did it).  For now, I used one of the collage pages I created for this card. 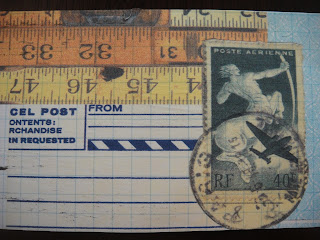 ICAD #47:  Collage Page II
Here is another card created from a collage page, like the one above. 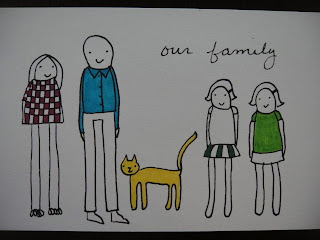 ICAD #48:  Our Family
In the Uncommon Goods catalog, I saw a product called Custom Family Glassware.  Artists Mary and Shelly Klein (a mother/daughter team) create illustrations of your family on drinking glasses.  I used the examples in the catalog to create a picture of my own family!


Enjoy the rest of your week!

I love the idea of taking the cut-outs and adding them to another ICAD. Wonderful!

If you hadn't said that first card was a rubber stamp, I would have thought it was a pen and ink drawing! It is lovely indeed and your light watercolours added the perfect finishing touch. It was also quite clever of you to cut out pieces from one card and glue them on another! I would probably have never thought of that myself, but now I am getting ideas for my own cards! The other cards are also great. I especially like the ephemera that you used on your collage cards.

oh, i do love that stamp of florence! icad looks like so much fun. i would love to join in...maybe next summer. you have so many fun, beautiful cards. how are you going to store / display them? (album? box? bind them together?)

Great cards Andria! :) I LOVE the family card, it's too cute!

WOW!! Andria, these are all great ICAD's.
Each one holds it's very own style, great use of art elements, love your creativity! :]
Take care. ~xx

Great cards as usual, Andria! I especially love your family :-)

I love your cards. Especially the top one and the bottom one. :)

Andria...your index card art is fantastic! My favorite one is "Blue Doodle"
Have a great weekend!
Mary

Beautiful cards again. The two collages are my favorites.

Whip It is my fave!

The drawing of the family is so cute, with those lovely long lines! So happy you are playing along in the index card challenge!