1.
My husband got in touch with his craftsy side for my birthday this past weekend. I have asked him in the past if he could drill holes into Scrabble tiles so that I can use them to create collaged pendants, so he decided to surprise me with the results as a birthday gift. 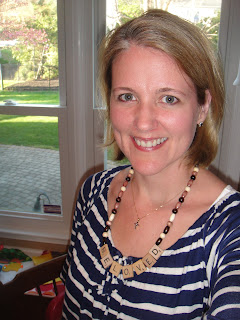 He strung together Scrabble tiles to spell "BELOVED," and added other beads to create a necklace for me.  How sweet is that?

Now he wants a proper drill press for our next gift-giving holiday (our anniversary, in May), though he says he thinks I'll end up using it more than he will.  He is very encouraging of me introducing power tools to my art and craft-making supply list!

2.
I also had to share another gift he gave me for my birthday, this one to encourage my jogging efforts.  I've been wanting to have fast-paced motivational music playing while I jog, so he got me an iPod Shuffle.  Have you seen these things?  They play tons of music, and are the size of a postage stamp.  It really is unbelievable how small this little thing is. 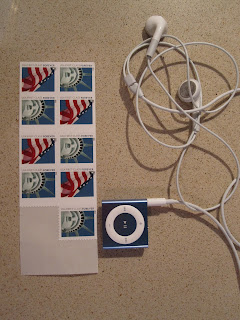 3.
After all the gift-giving, including sweet cards signed by my girls (both are writing their names now!), my husband took me to The Melting Pot (yum!) and then on to Briggs Auction in Booth's Corner.  We've been going on occasion on Friday nights since before we had kids, maybe even before we got married.  Even when there isn't too much of interest up for auction, I find it to be a relaxing, kind of soothing environment.  The people-watching is fascinating, and I love listening to the auctioneers' voices.  There wasn't too much that caught our eye on Friday night, but we came away with a few fun things: 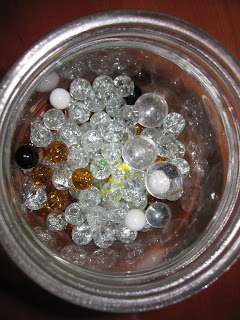 My husband was quite excited about this little jar of marbles.  He had no idea that I have a whole huge jar of marbles down in our basement.  Neither of us realized how much the other one likes marbles!  See, we are still learning new things about each other.

We also bid on a box of picture frames.  I have visions of all the ways I can alter them to make them more interesting! 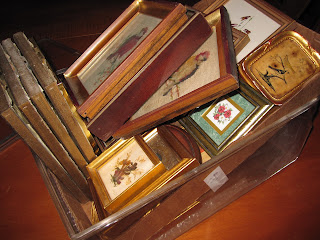 We also bought two crazy decorative wood chickens, but I didn't take their photo.  I was amused that we both kind of liked them, though the auctioneer actually laughed at my husband for bidding on them, and no one offered a counter-bid!  It made it even better that we were alone in the world together liking them!

All in all it was a fun way to usher in the last year of my 30s.  Time to live it up!
Posted by Andria

"Beloved" -- one of the most beautiful words in any language! What a warm and loving birthday you had. See you soon!

so glad you had a fun birthday and received such a personal hand-made gift! i'm jealous of those frames and can't wait to see what you do with them.

Dammit, now I want a husband too! ;-) Looks like you had one wonderful birthday, lucky you!

What a sweet husband you have!! I love everything you got...that necklace is sooo sweet:)

I wanna see them chickens! Can I get an amen??

Lucky birthday girl! I love that scrabble necklace, what a thoughtful gift.

What a wonderful birthday you had! The auction sounds like such fun. I had to laugh about the chickens!

Hasn't Dana's class been such fun!? I'd love to see what you've been creating for it!

Sounds like a fun evening and a memorable event. Finding those things you both like is a wonderful, bonding moment.

oh, yeah, those iPod shuffles are the cutest! And there's so much room on them you can't believe it.

You are a lucky girl! And also: you deserve it!