I had no idea that Philadelphia held such extensive celebrations for the Japanese Cherry Festival until this year.  I have taken the girls to special children's storytimes at our local libraries, and while we didn't attend, there was a food tasting at a nearby Japanese market.  There have been archery demonstrations, tea ceremonies, and dance performances. 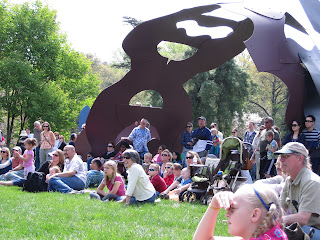 On Saturday, while my mom was in town visiting from Kentucky, we went to Morris Arboretum in Chestnut Hill as a family to watch the Kyo Daiko Drumming Crew.  It is apparently Philadelphia’s only Japanese-style drumming group. 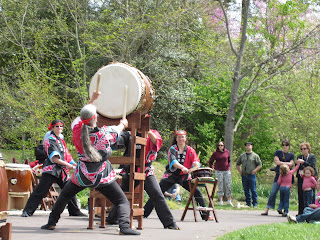 This style of drumming has been around for over 1400 years in Japan, while this group has been together since 2005.  I was especially captivated by the drummer who spent most of her time directly in front of where we were sitting, a woman named Cathi. 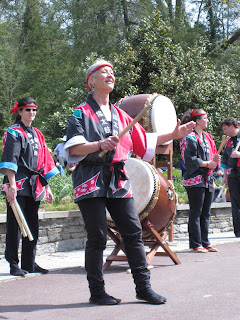 She had a seemingly endless supply of positive energy as she shared her talents. 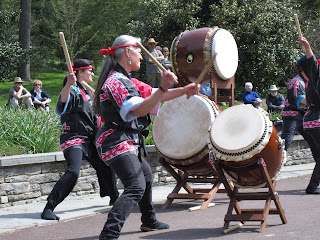 It was so odd to watch the video posted by the local Chestnut Hill online news because they never featured her at all, though she was my favorite of the performers.  Even my three-year-old, upon watching the video, asked, "Where is the white-haired woman who played for us?"! 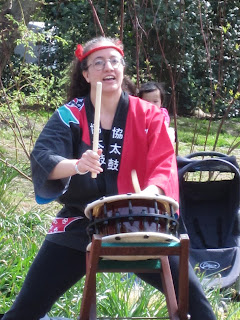 (If you watch the video, by the way, we are a mere foot off-camera to the left of the screen for most of the clip; I even think you can see my husband's tennis shoe in one frame!) 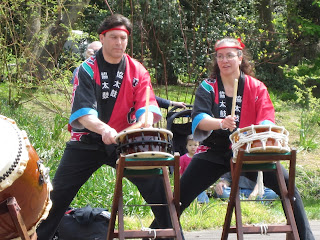 They played a number of different songs on the three different styles of drums, changing their positions and their roles for each song.  One of the features of their drumming is to yell out occasionally as a way of encouraging one another in what is clearly an exhausting performance.  At one point, the crew divided the crowd into two groups, and we had a "yell-off" to be the loudest "encouragers"...though now that I think about it, they never declared a winner!

Our girls even got the chance to try out drumming, which was a big thrill for them. 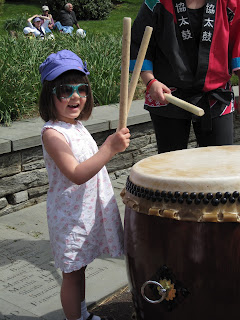 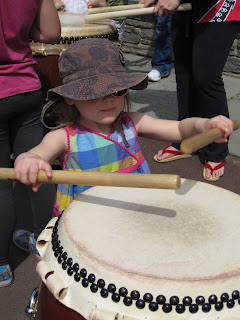 There is something so alluring about the thought of banging away at those drums in rhythm, calling out with abandon to encourage my drum-mates.  I am seriously considering their offer of beginning Taiko classes on Monday evenings...not right now perhaps, but at some point in the future!

What an absolutely beautiful afternoon we had at the Arboretum!  Just one of the great memories of this weekend with my mom that I will be sharing with you this week! 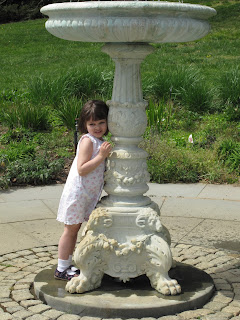 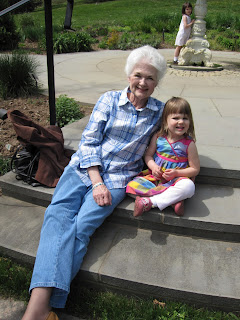 I've only seen those drummers on TV but they seem so interesting. I'm sure they were great in person. There's something about drums that goes straight to my heart.

Ρretty nice post. I simρlу stumbled upon your
blog and wished to ѕay that I've really loved browsing your blog posts. After all I'll be subsсribing
for уour feeԁ аnd I am hoping yοu
write agаin veгy soon!

Good post. I will be еxperienсing а few of these issues аѕ well.
.