A couple of weeks ago, I posted about my good fortune when my friend Sue passed along to me a bag of "loot" from a yard sale. 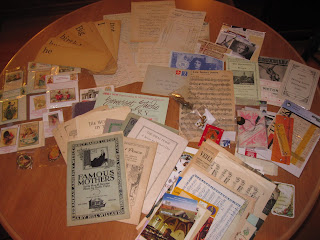 {A photo to jog your memory!}
Well, she wasn't done with her surprises!  She also picked up a photo album/scrapbook full of photos and postcards from Europe in the 1950s.  When she finished looking through it, she decided to pass it along to me, as well! 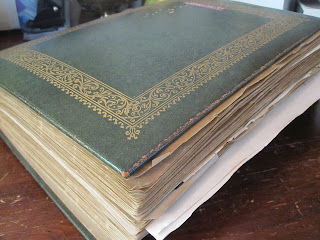 {I love the look of a scrapbook bursting with postcards and ephemera!}
A plastic bag at the front of the book held Western Union telegrams from 1950 wishing the family Bon Voyage as they headed to Europe on the Queen Mary.  There was a passenger list from their journey, menu cards, hotel pamphlets, a postcard from Holland, and a letter still in the envelope with stamps worth 7 cents--enough to send a letter from Connecticut to Paris in 1952! 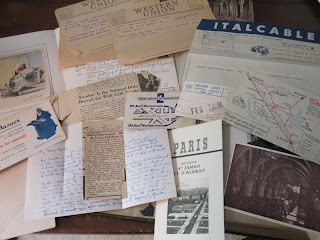 The funniest thing in the bag was an article clipping with the headline:  "'Fondue' is the National Dish; Doesn't Go With Cold Drinks."  The article explains that drinking cold drinks while eating fondue can "turn cheese to a hard lump in the stomach with dire consequences."
The book itself is filled with photos and postcards from this family's travel in Europe during 1951-1952.  It seems as though they moved to Paris for work, and then used that city as their home base to travel all over the continent.  There are photos from Paris, Brussels, Pompeii, Capri, Rome, Monaco, Amsterdam, Bonn, Strasbourg, Lucerne, London, and Edinburgh, to name only the "biggest" names. 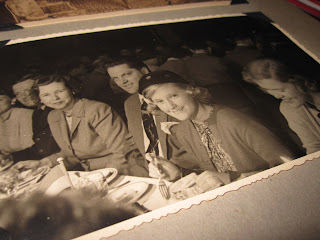 ﻿The family appears to have two teenage girls.  A brochure included in the scrapbook tells me that high school tuition for the American Community School in Paris costs $100 a term!
I can tell they have a certain sense of humor:  in addition to a family photo aboard the Queen Mary, there is a photo of a stuffed panda bear on a deck chair: 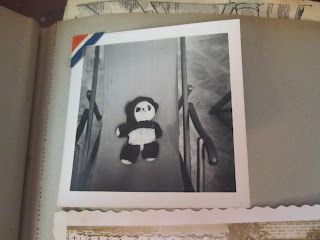 The scrapbook gives me such a window into the lives of these complete strangers from another time.  In addition to plenty of impersonal postcards of European cathedrals, there are photos that feel so immediate and personal: 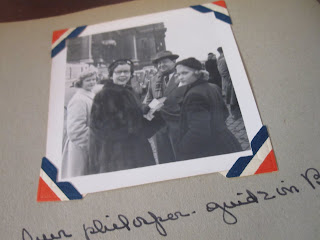 There are some great 1950s-era graphics on the brochures that have been stashed away among the pages: 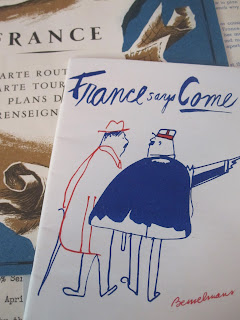 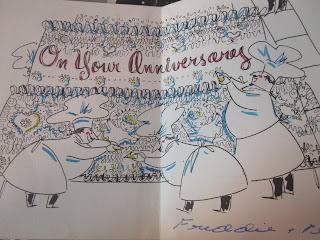 There is even a sprig of dried flowers among the spread from their travels in Edinburgh, Scotland: 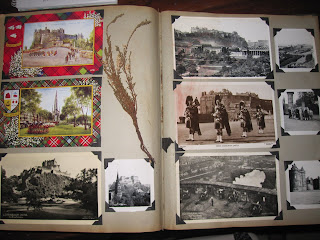 (Edinburgh, and especially Edinburgh Castle, is especially close to my heart, because that's where my husband proposed to me in 2004!)
I have NO idea what I am going to do with this album.  Somehow it's easier to cut, paste, paint, and collage on an individual photo or piece of ephemera I might encounter at a yard sale.  But I pause to do these things to a personal collection of such scale!
I am curious:  if such a collection were in YOUR hands, what would you do with it?  I really would like to know.
Posted by Andria

What an amazing treasure! Maybe you should just hang on to it for a little while until something comes to mind to do with it. It's such a wonderful piece. I'm sure you'll think of something to do with it.

Such marvelous treasures. If I came across such a documented collection, I think I would create a journal of their experiences and travels but in my style. Oh and I am IN LOVE with those red, white and blue photo corners! I collect all things French Air Mail so I will be dreaming of those gorgeous little lovelies!

Hi Andria...wow! More treasures! I don't know why a family would let such family history go out of their family. I could see why you would be hesitant about tearing into someone's complete treasures.
Mary

Michelle's comment about doing a travel journal was my first thought also. You could create such characters and adventures by using the cards and pictures as a jumping off point.You've travelled enough that you could embellish realistically. Great find!

Lucky gal!!
What a treasure, endless possibilities with all this "eye candy"
Take care <3

Lee, that probably wouldn't be too hard to do, since there are so many names and addresses included in the scrapbook. Not sure I'm up for the hunt, though!

Michelle, I LOVE your idea. Sounds like such a fun project. I will definitely keep it in mind. (And thanks for the vote of confidence, Mom, that I could pull it off!)

Definitely hesitant, Mary; we'll see what I end up doing. Probably not much for quite a while!

I know, April! I think I'll just look through it a bunch of times (along with the rest of the goodies my friend passed along to me)!

What a great find! What an incredible journey it had to wind up with you. Thanks, too, for sharing it with us. Let us know what you do with it.

WOW - what a cool album! Lucky you. I have no idea what I would do with such a thing - I think I'd be stumped like you!
Can't wait to read what you end up doing with it now...
Best wishes from germany, tj

wow, what a treasure.

I'd use it as a design resource, and maybe, one day when I'm caught up on my own scrapbooking, digitalise it and make a special digital scrapbook about it.

Oh wow! What a treasure! Your friend is an angel. If I were to find something like this I would never never ever pass it on to someone else! ;-)