Last month I mentioned that I was playing with books, thanks to the book by the same name by Jason Thompson. Completing the projects in this book requires plenty of cutting, tearing, and disemboweling poor, unloved books that have been discarded, thus bringing them new life in a different form.

One of the first projects I completed was a business card holder. 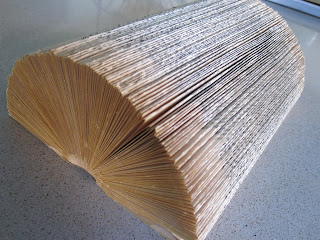 Basically all you have to do is remove the front and back covers from a paperback book, and then fold every page in half. There’s some nice, mindless therapy to this task!

I like the look of the folded pages, but I’m not particularly impressed with its usefulness as a business card (or any other type of card) holder. I thought it might be a fun way to display some of the beautiful postcards from recent swaps, but you can’t put any in front of the halfway point, or they dangle forward in a way that prevents you from seeing the front of them. I almost think it works best as a piece of “book sculpture.” 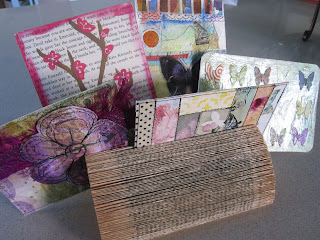 Being the postcard fan that I am, I loved this next simple project I completed: 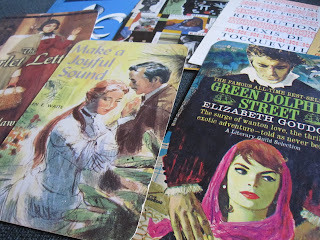 All you do is remove interesting covers from old paperback books, cut them to postcard size (4”x6” is pretty standard), and adhere a postcard back to them where you can write the message and affix the stamp.

One place on the internet said that you cannot send postcards with rounded corners in the USPS, but the woman at our post office didn’t seem to know what I was talking about when I asked her about it.

My most recent favorite project was the book blossoms. 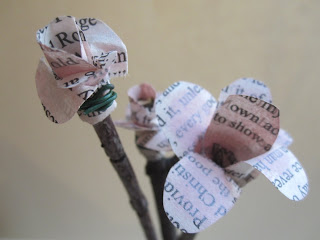 I used a small strip of text, cut lines along one edge (the book suggests five slits to create six petals, but I was more happy when I cut closer to twelve for LOTS of petals!), and rounded the edges. A little pink chalk ink pad adds colors to the petals. 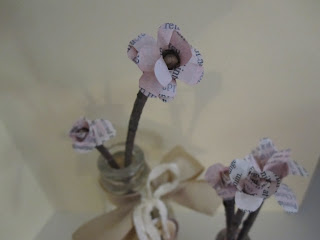 My next step was to wrap the strip of text around an actual twig from the backyard, and then hold it in place with some wire wrapped at the base. The only trick here is to avoid snapping the twig, while still wrapping the wire tightly enough.

I thought at first that this project wasn’t going to look like much, but when I finished the flowers and put them in some bottles that I had decorated with vintage papers and stamps, I really liked the look. I ended up sending one to Sylvia for the Stamping Ground PiF two weeks ago. I’ve always failed miserably when I’ve tried origami. For the life of me, I have never been able to follow those pictures of folds to create anything that looks like anything. Thompson’s book has a dimensional circle ornament that isn't exactly origami, but I thought maybe I would finally be able to complete a paper-folding project. 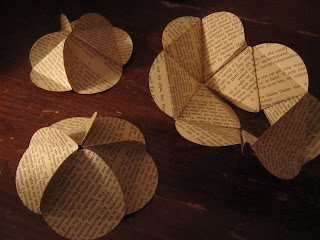 I thought wrong. I will try again, as I only tried once, but as usual, I had trouble following the directions.

Besides the circles for this last project, I cut a bunch of butterflies, which I used for cards and sewing machine practice. 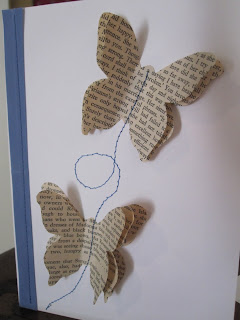 I then used some of them for Mollie C. Greene’s Immobile Mobile project in Thompson’s book. 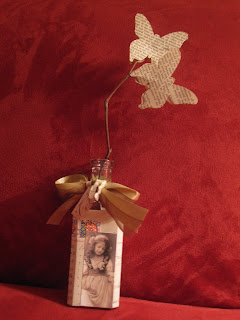 She suggests using the little butterflies on a wire to decorate cakes and cupcakes, or to further beautify flowers in a bouquet. I again used them in my decorative bottles (some on wire, some on twigs), but I could also see making some sort of a polymer clay base to make a decorative piece. 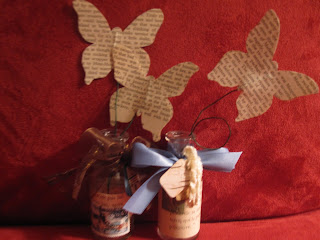 I have started the book jacket billfold project; I have the book cover laminated on cardstock and ready to fold and sew.

And then there’s the book page tote.

And the paper beads.

And the pocket book (I already have a copy of Black Beauty picked out for that one!).

Playing With Books is likely to keep me busy for quite some time!
Posted by Andria

I have that same book. It has so many fun projects in it. Now that you've reminded me, I think I'll go find it and get busy with one of them.

Your little flowers looks so pretty. The origami is a mystery to me, too. I've never been able to do it.

i love all your book page projects! you must not sleep at night, right?! you always seem to get so much done. :-)

Wow! Look at the projects you've made from old books...lots of great ideas! Looking forward to see what else you make when you are "playing with books."
Mary

I love all these projects, especially the blooms! Must get me a copy of this book I think ;-)

I love the book blossoms and the book cover postcards are a really lovely idea.

Origami ranks right up there with deciphering how to fold dinner napkins into fancy shapes. I loved your book page flowers and look forward to seeing what else you come up with.

I'm so impressed with all of your projects! I have one of his other books: Making journals by hand, which is pretty inspiring.

I look forward to seeing some of your projects, Janet!

Laurie, you made me laugh. I REQUIRE 7 to 8 hours of sleep at night for sanity, so everything has to get worked in around that!

Chris, loved your "shut up"...that made laugh, too! I've loved butterflies since I was a little girl, so it's fun that they're such a popular motif these days.

Thanks to all for your visit and your comments; they bring me lots of happiness!

This was a book to enjoy, wasn't it? I could not get the little houses to work--not patient enough! But I loved the folded book project, too. I used the back half for postcards and the front half for pretty ribbons and feathers. That worked OK.
The post office took my rounded corner pieces too! YAY!

Oh my... It looks like we both have had books on our mind :] (heheheee)
Love these, great project you have created, with old book. Looks like fun.
Thanks for sharing.

Hi,
I just love the book blossoms and other paper items you make. Your blog is very enjoyable to read. Have a great day!