This past Saturday, I attended my first class at the Main Line Art Center, in Haverford, Pennsylvania.  Nancy Bea Miller taught a group of seven of us about an art form known as etegami.  I came across the class in the Art Center's online catalog, and was drawn to the fact that it incorporates drawing, watercolor painting, rubber stamp carving, and mail art all in one art form.

Never having heard of etegami before, I did some research before the class took place. I came across the web site of Deborah Davidson, who serves as kind of an "etegami guru" for Westerners.  (Perhaps she should be called an "etegami Sensei"!)
I found out that etegami is translated "picture letter," and can be called a form of Japanese folk art or mail art (because it is usually created on postcards and mailed).  Etegami usually contains a simple image, accompanied by some carefully chosen words, as well as the hanko, or stamped "signature" of the artist.
The art form is considered a "one shot deal"--no planning, no sketching.  There are no rough drafts.  The artist uses a line drawing brush and liquid ink to draw a picture of some object she is currently viewing.  She then adds color with another brush and two to three colors of watercolor paint.  (Traditionally, the artist uses water soluble mineral based gansai paints, which some of my classmates were fortunate to possess, but I used the basic Western version of watercolor paints.)
The traditionalist might paint her image from colors she has organized in a porcelain dish with shallow compartments for mixing the paint colors; many of us used standard watercolors in plastic pans.  The traditionalist might paint upon washi postcards called gasenshi; many of us used watercolor paper cut to 4 x 6 postcard size.  Our hankos were carved from pink erasers, going to show that there are perfectly adequate substitutes for pricier or harder-to-access supplies for the artist who wishes to jump in and try something new!

On her web site, Deborah Davidson explains the origins of etegami by describing how Japanese calligrapher Kunio Koike developed the art form in the 1960s because he wanted to develop something more spontaneous than what he was studying; he is now considered the Father of the Modern Etegami Movement.
The etegami motto is Heta de ii. Heta ga ii.  This is translated along the lines of, "Clumsiness is no problem. Clumsy makes it better." All of us in this beginning class at the Art Center felt pretty comfortable moving forward with a motto like that!

When I watched videos of artists creating etegami online, I saw them sitting up very straight, their elbows raised, and their forearms stretched in front of them at the same height as their elbow.  They hold the brush at the very top, quite lightly between their thumbs and first two fingers.  The brush essentially dangles down so that only the tip touches the ink to the paper.

On the web sites I was using for research, it was emphasized that the artist is to control the brush's movements with the upper arm, rather than with the wrist.  (Somewhere I read that when you hold the brush like a pencil or pen, you focus more on "drawing well," which is not what etegami is about.)
Etegami creator Kunio Koike recommends spending up to 30 minutes practicing lines, letters, spirals, and other shapes and motions with the ink and brush before beginning a new work of etegami.  Since many of us enjoy the fact that etegami is a rather "quick" art form to engage in, preceding it with 30 minutes of practice is probably not feasible for most of us! But I enjoyed our ten minute warm-up more than I thought I might.  I can see the value in spending time getting "re-acquainted" with the brush, the way it makes contact with the paper, and the way the ink moves between brush and paper.
Etegami uses as its subject matter the things of everyday life.  Traditional etegami often reflects the seasons through such things as fruits, vegetables, and flowers.  Many etegami artists will draw toys or other objects that surround them in daily life.  Like sketching, etegami makes the artist pay closer attention to things around her.  I found myself looking at things and thinking, "Hey, that would make a good piece of etegami!"
Nancy suggested that we start our drawings off the edge of the paper: the lines of the object run off the page so that the drawing looks like it is completed somewhere beyond the boundaries of the card.  This approach forces me to draw the object much bigger than I would have a tendency to otherwise, and gives a very vibrant, graphic quality to the painting.

The color is applied more by rolling or tapping the brush, rather than sweeping the brush across the paper.  Etegami doesn't result in photographically-correct images, which is probably another reason it is an approachable art form for the beginner.

The words used on the card can come from song lyrics, poems, or quotations.  The ones I appreciate most are the ones that introduce some sort of humor related to the object that is drawn.
I love the fact that etegami is created from the "stuff" of everyday life.  I don't have to look far at all to find a subject for a piece of etegami--the remote control on the coffee table, the cat curled up beside me on the sofa, the apples in a bowl on the kitchen counter, the weeds growing up in the garden outside my window, the butterfly that just landed on the bush, the back of the car parked in the garage, the toy pony my daughter left on the living room floor...any or all of these things could become a perfectly legitimate subject for a new piece of etegami. 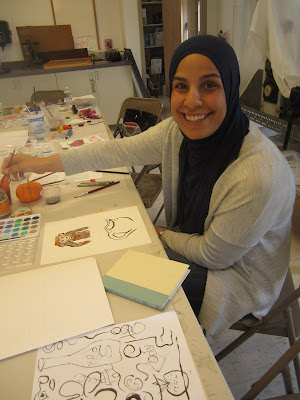 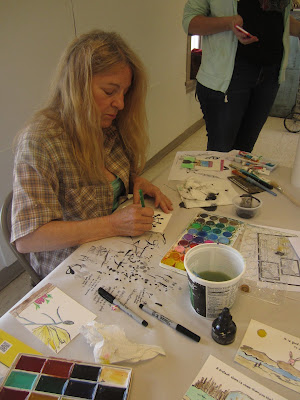 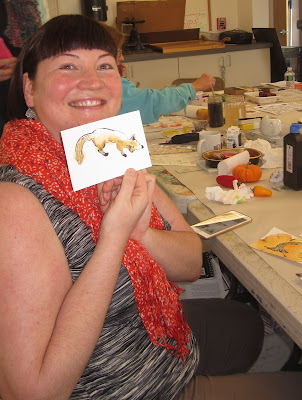 LOVE this post and the information you've found for us Andria, thank you so much for sharing it all and about your fun class. I so want to give this art form a try, thanks for the inspiration. :-)

Looking forward to seeing your postcards next!

Thanks for sharing all the info! Your class looks like it was a lot of fun.