The Reveal: Loot from the Allentown Paper Show

Okay, Paper Lovers, I won't leave you hanging for long.  Here's a peek at my purchases from the Allentown Paper Show on Saturday.

First, here's something a bit unexpected: 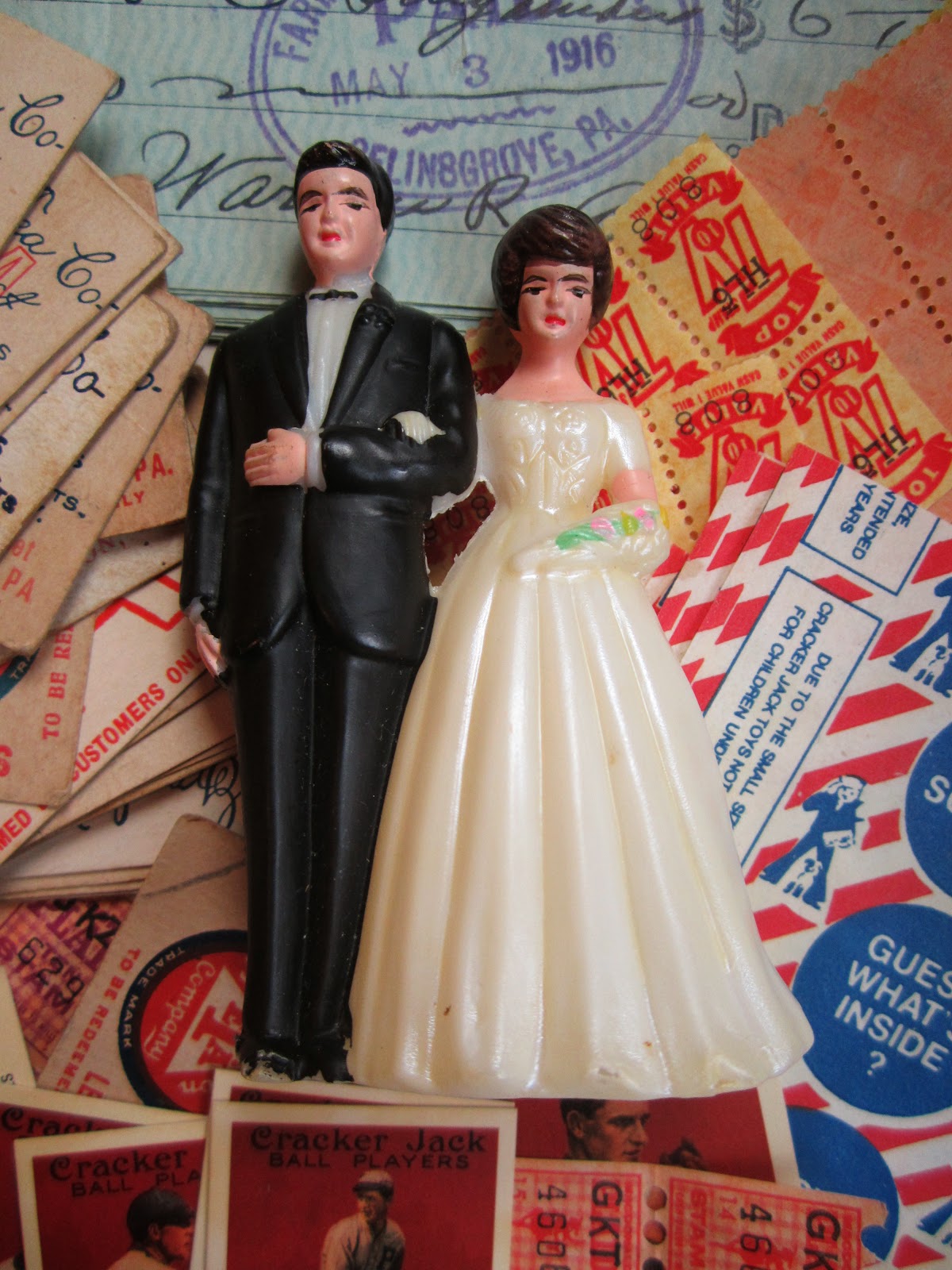 I couldn't resist this bride-and-groom cake topper, and have the idea that a collection might form.  Last time I went to the Paper Show there was an entire suitcase of these to choose from, but now that I am interested, this is the only one I saw. 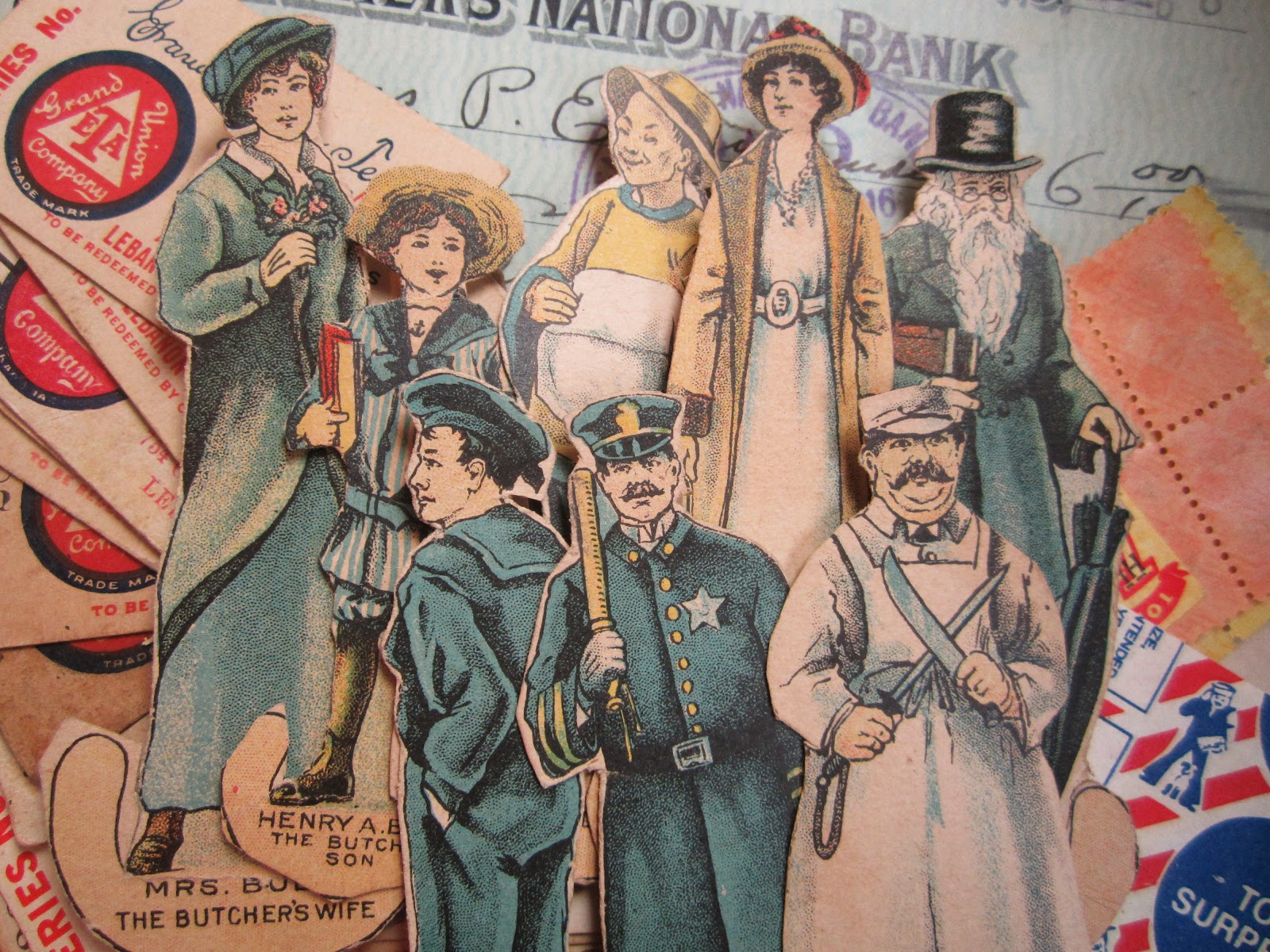 These cut-outs appear to be characters in a game, with names like Mrs. Dough, the baker's wife; John Bull, the butcher, and Mrs. Bull, the butcher's wife; Professor Pluss; and Heave Ho, the sailor.  I did some research trying to figure out what they might be, and I am thinking that they might come from the 19th century game called  Happy Families.  If you have heard of this, and agree, please let me know! 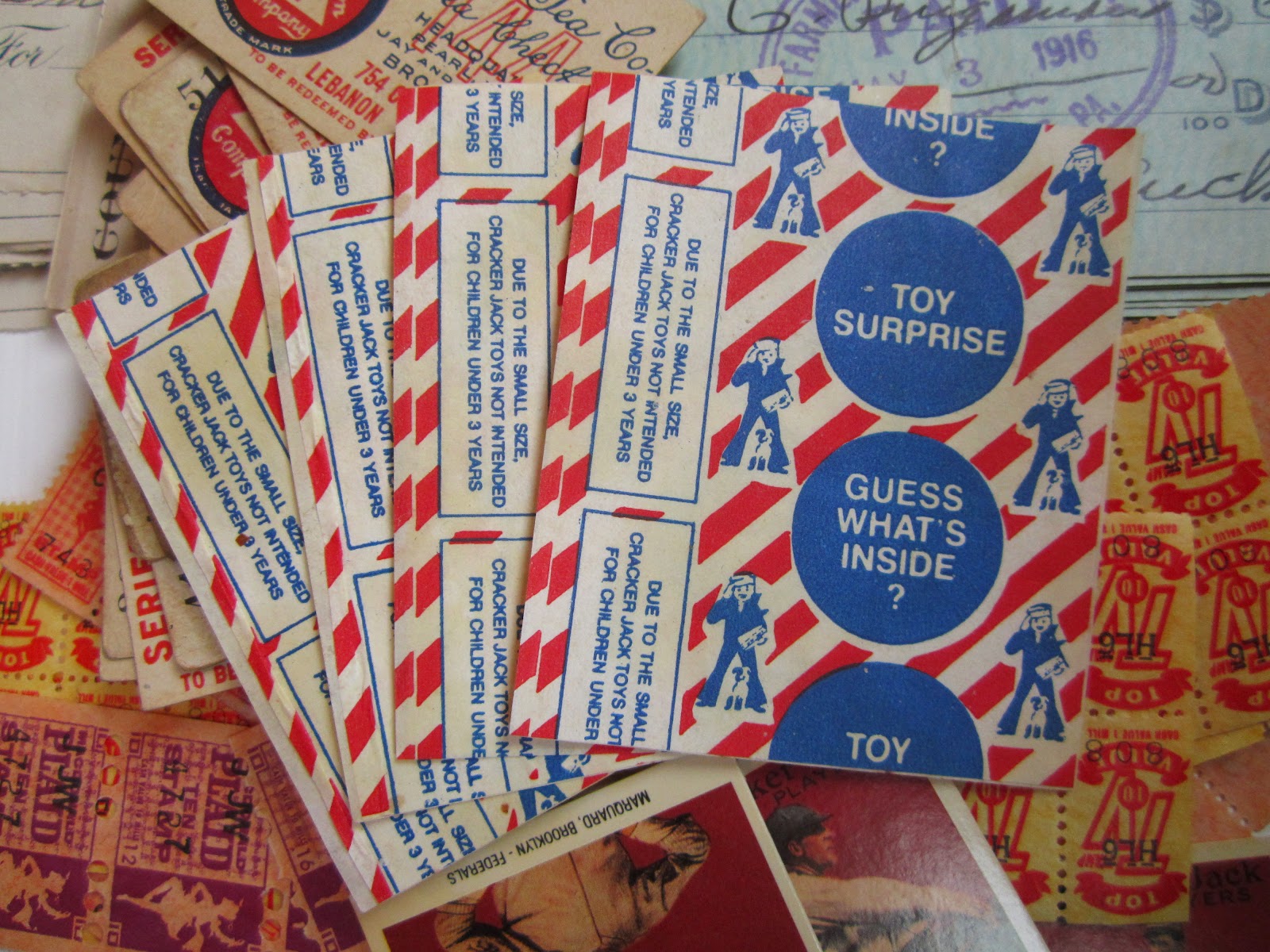 I picked up these Cracker Jack "surprise" wrappers, along with some tiny Cracker Jack baseball trading cards.  (And I laughed to myself since I have a fit when my girls want to save their candy and lollipop wrappers!  That's tomorrow's ephemera!) 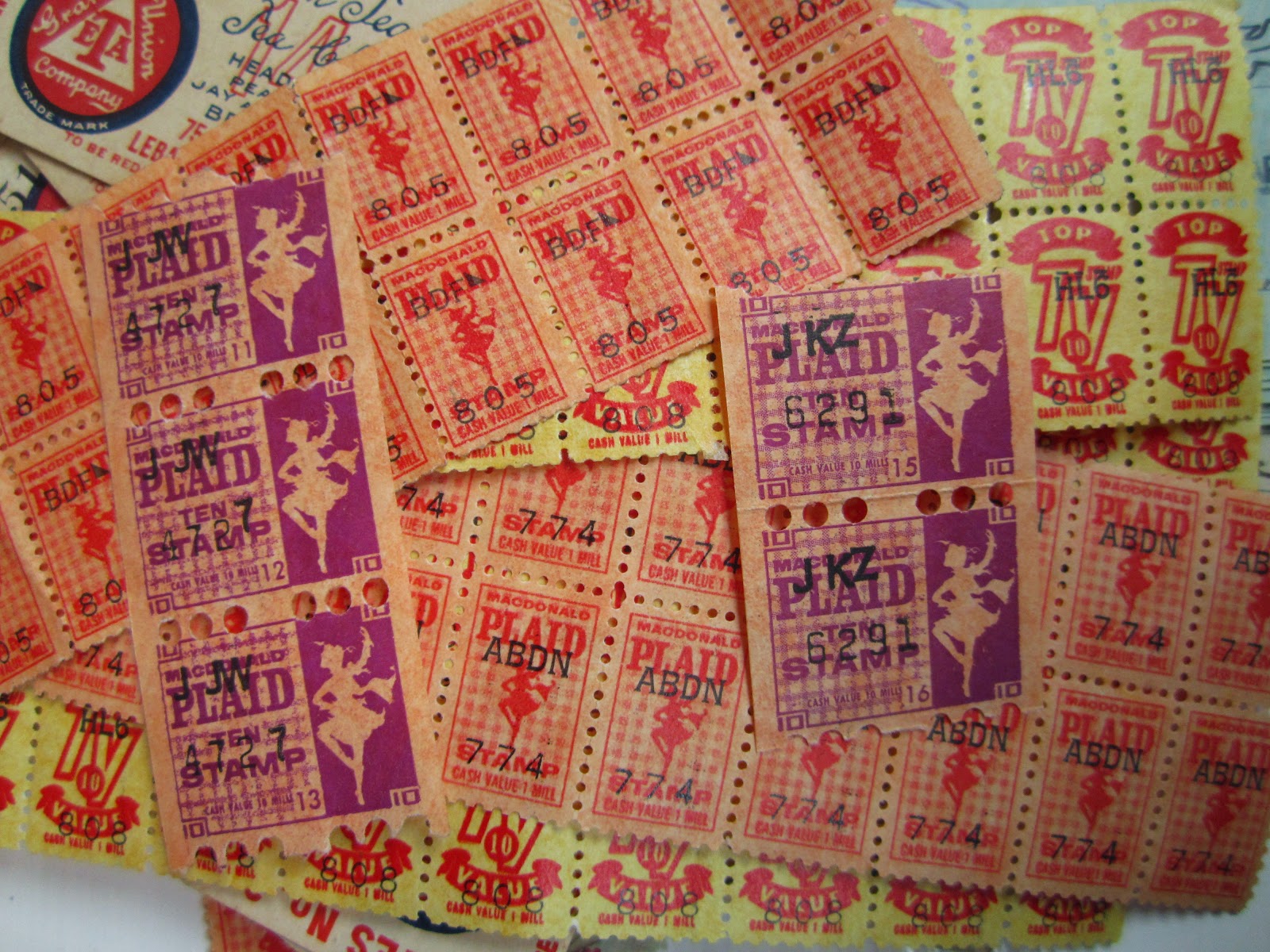 I bought these Macdonald Plaid and Top Value Stamps from the 1960s.  I suppose I should have bought the books, too, but I was really just interested in these.  As I understand it, customers would collect the stamps from their grocery store purchases, save them into books, and then redeem them for merchandise showcased in catalogs they could look through.  Grocery stores still do versions of this today, and I have a few good pots and pans to show for it! 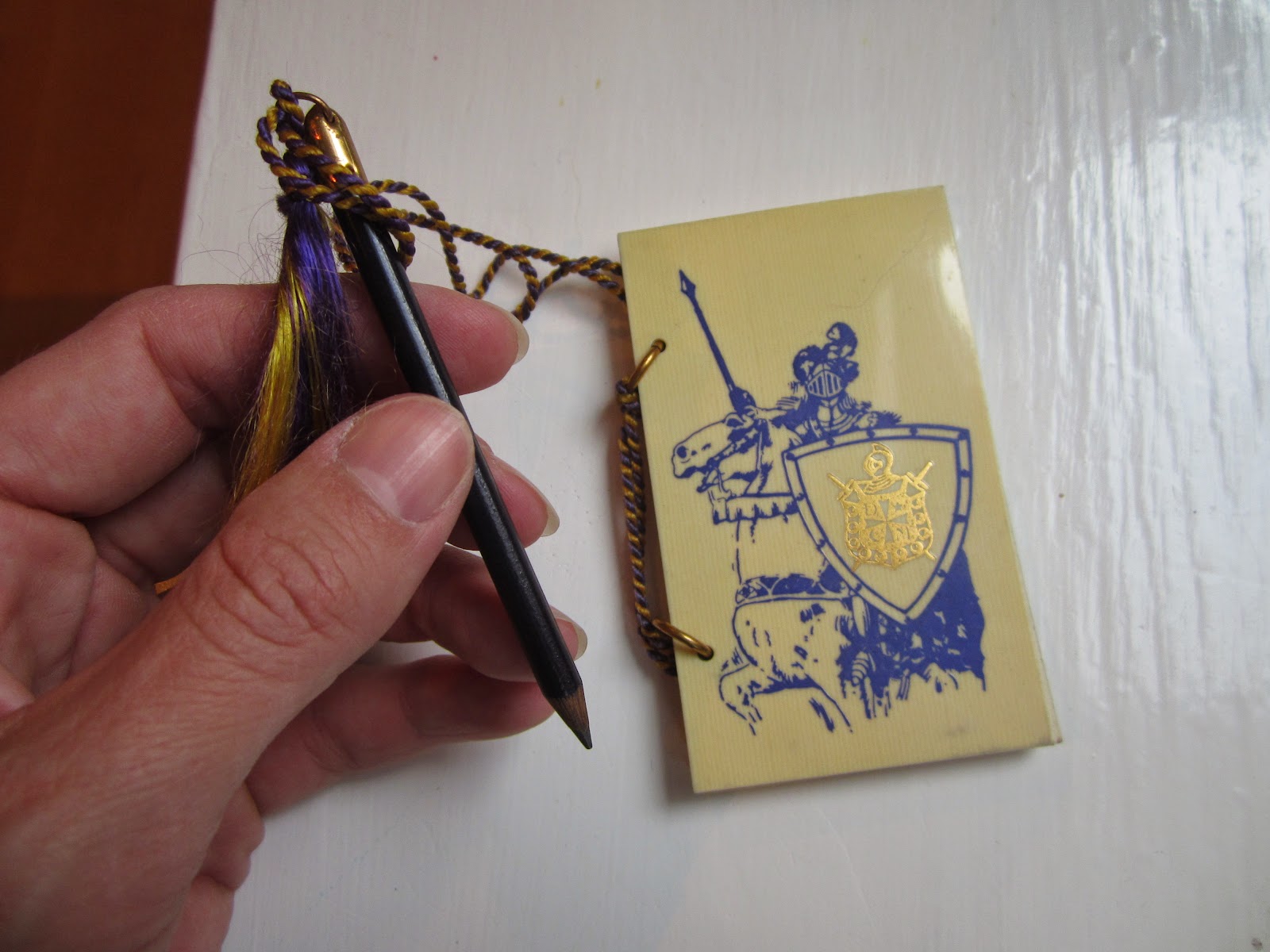 I found this little book absolutely charming:  a dance card from the 1920s!  It is from the De Molay Fifth Anniversary Prom on October 19, 1928.  One page lists the prom committee, and two pages are available for the girls to list their promised dance partners. 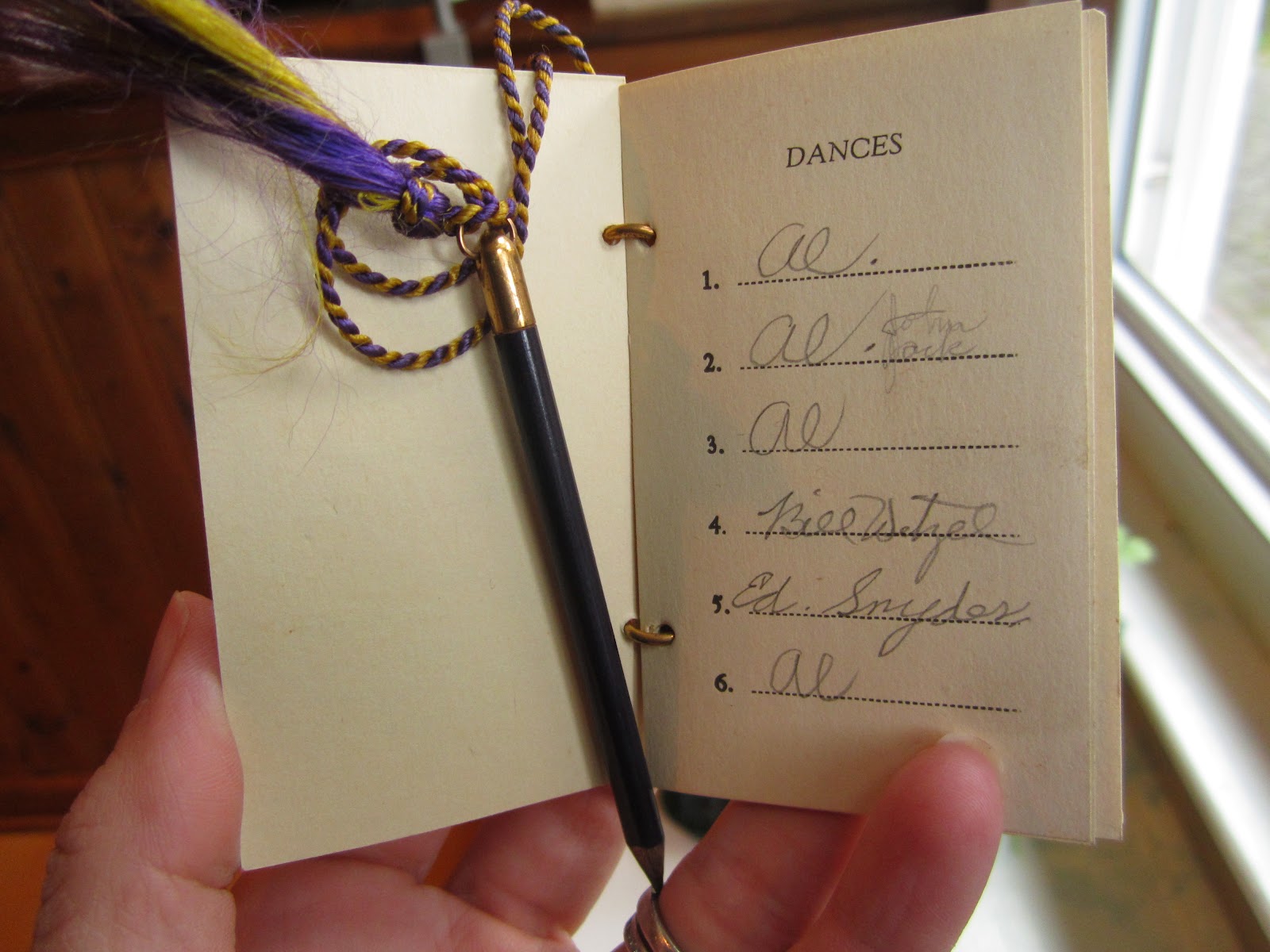 I had never seen a dance card before, and think it is another great potential collection.  (And at $3, an affordable collection, too!) 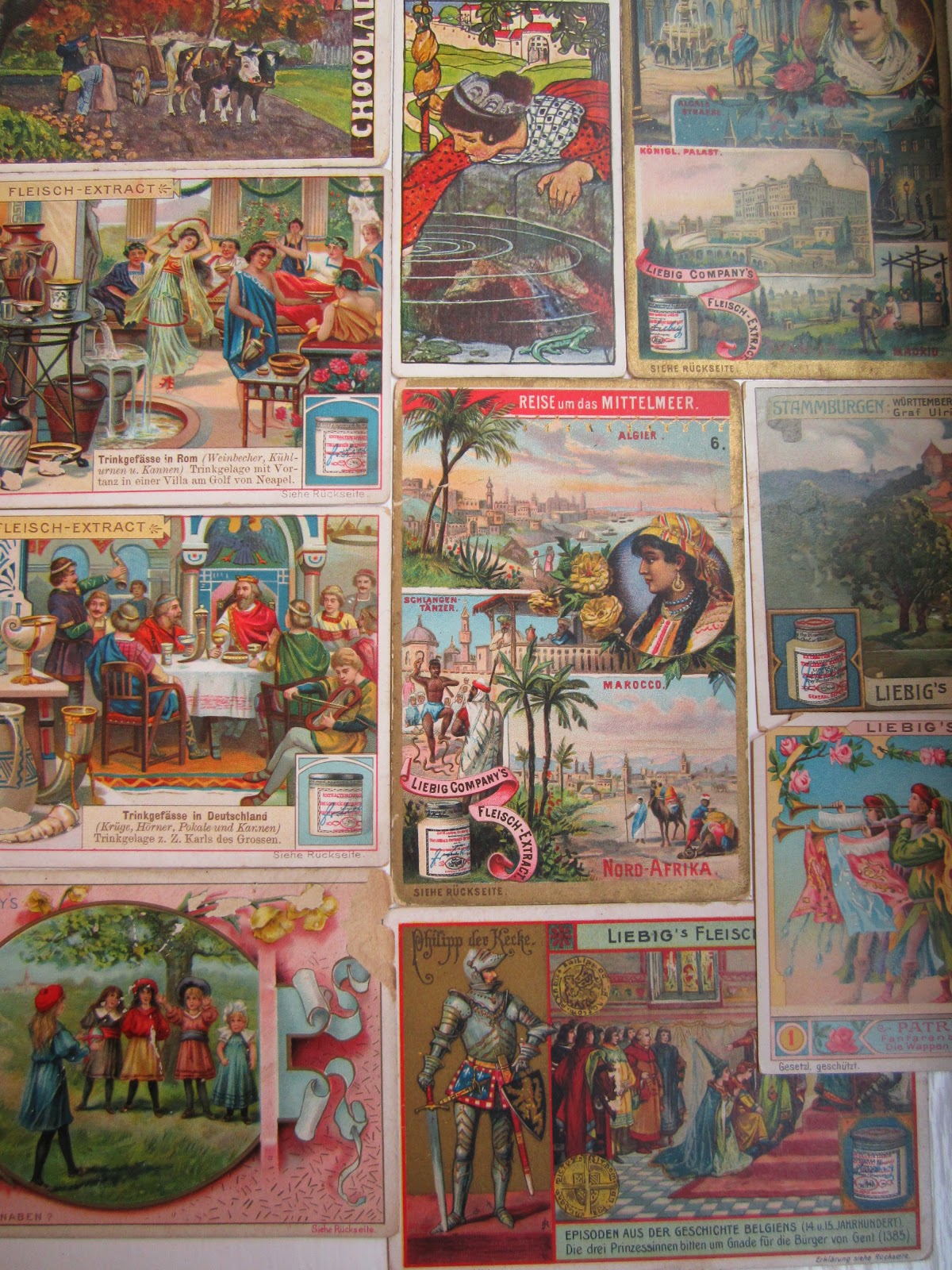 These trading cards measure about 2 inches by 4 inches, and most come from Liebig's Fleisch-Extract.  This is apparently a thick, dark, syrupy beef extract paste sold in glass bottles and tins in the late 1800s, early 1900s.  Yum! (Not.)  They have wonderful illustrations, though! 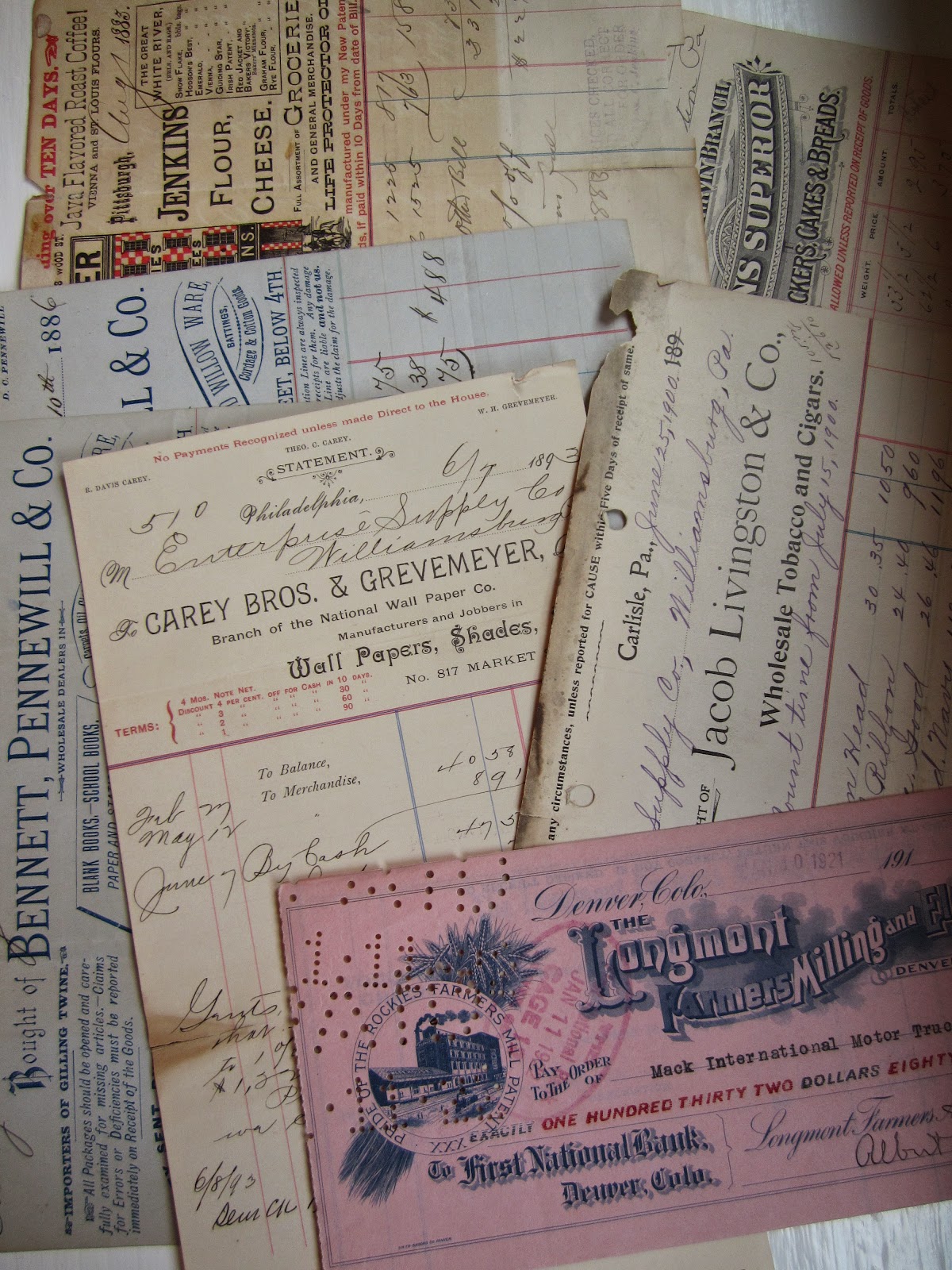 Of course, I picked up the requisite stash of yummy receipts and checks with lots of original writing from the 1880s and the 1910s. 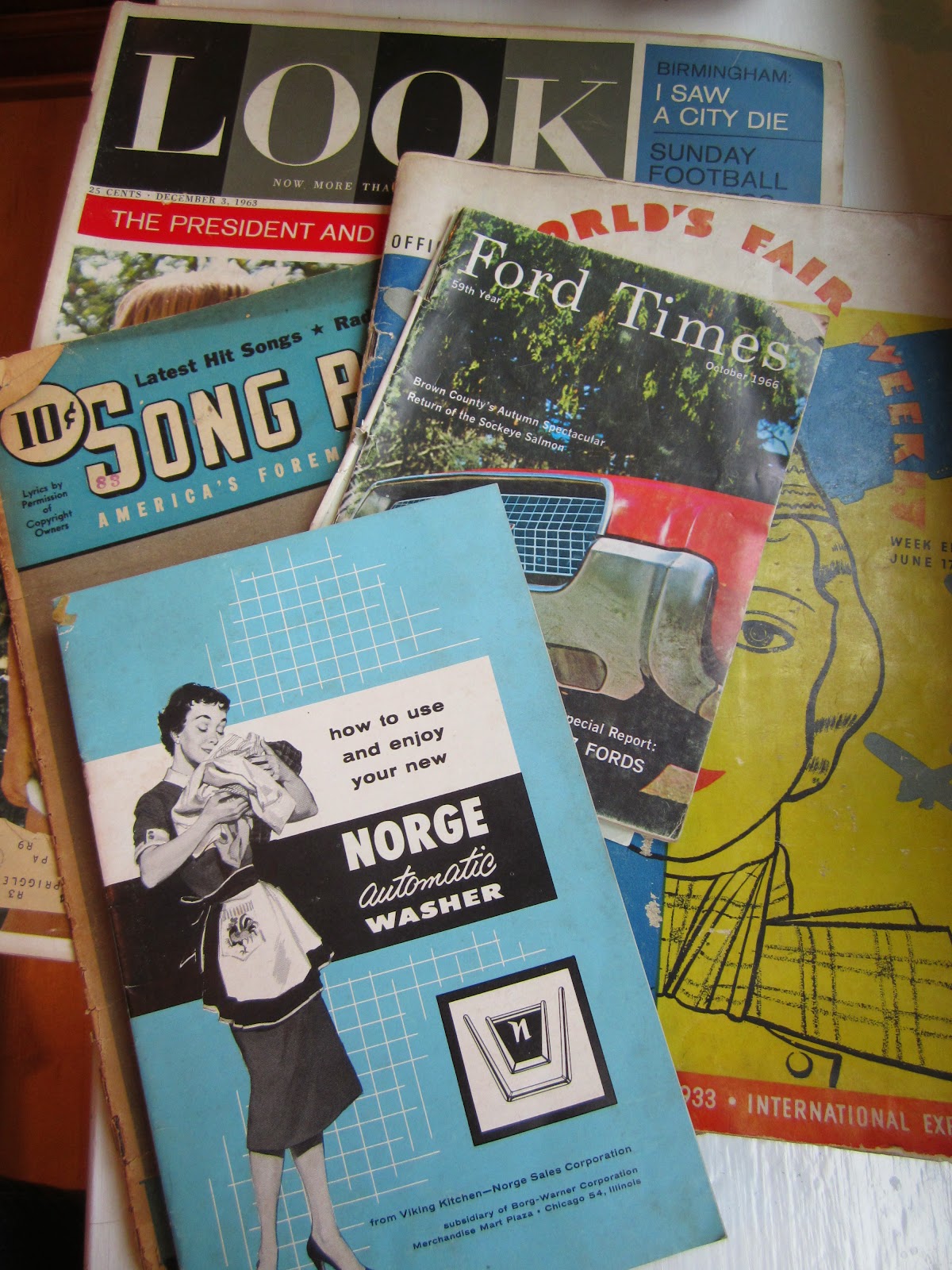 I bought a few magazines and brochures from the dollar bins, mainly for their advertisements from the 1930s to the 1960s.  I was hoping for some domestic magazines, like Good Housekeeping and House Beautiful, but the dealer selling these wanted $6 each, and many had pages and pictures cut out!  I probably could have wheeled and dealed, but by the time I found him, I was at the end of my five hour foray and feeling a bit burned out. 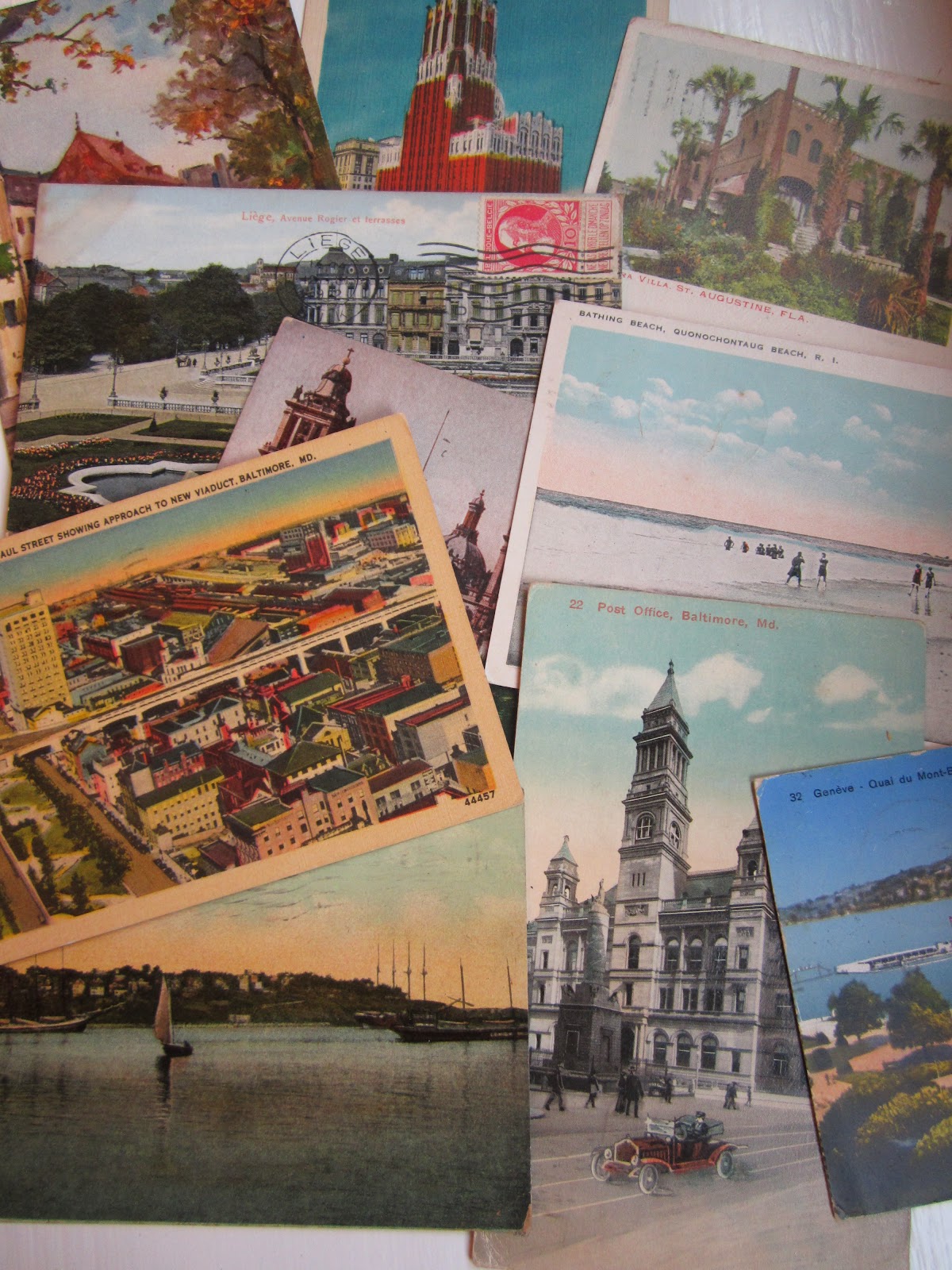 I didn't buy too many postcards this time, mainly because I have so many already and I wanted to spend more of my time sifting through the photographs.  But here is the selection I bought from the 15-cents-apiece boxes.  More than anything, I got them because of the messages and stamps on their backsides: 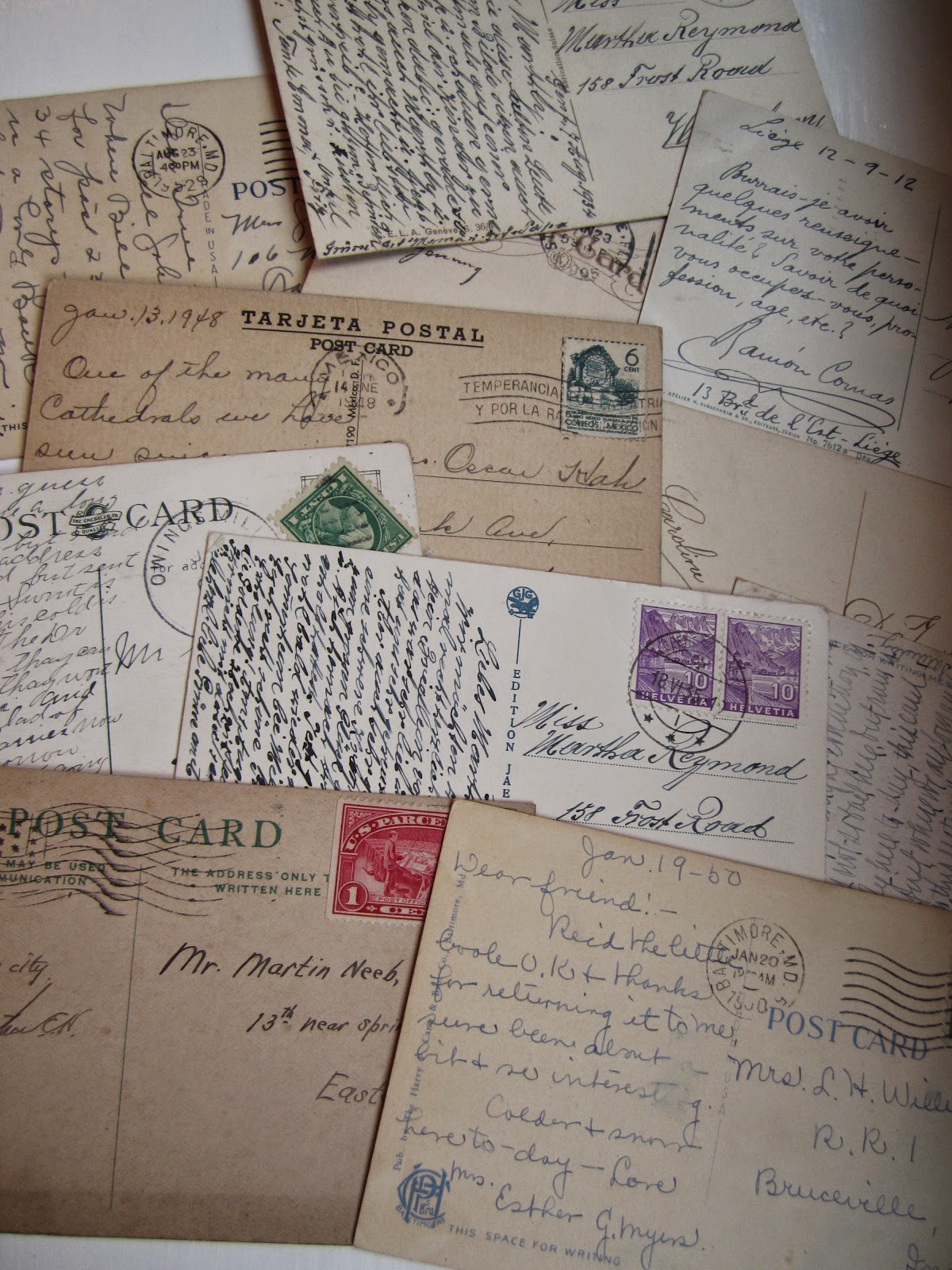 I purchased a bag filled with Grand Union Tea Company Tea Checks, which I forgot to photograph.  I was interested to see that a seller on Amazon is asking $15 for one tea check, whereas the seller at the paper show basically begged me to take a stack of them off his hands for $3.  Buyer beware! 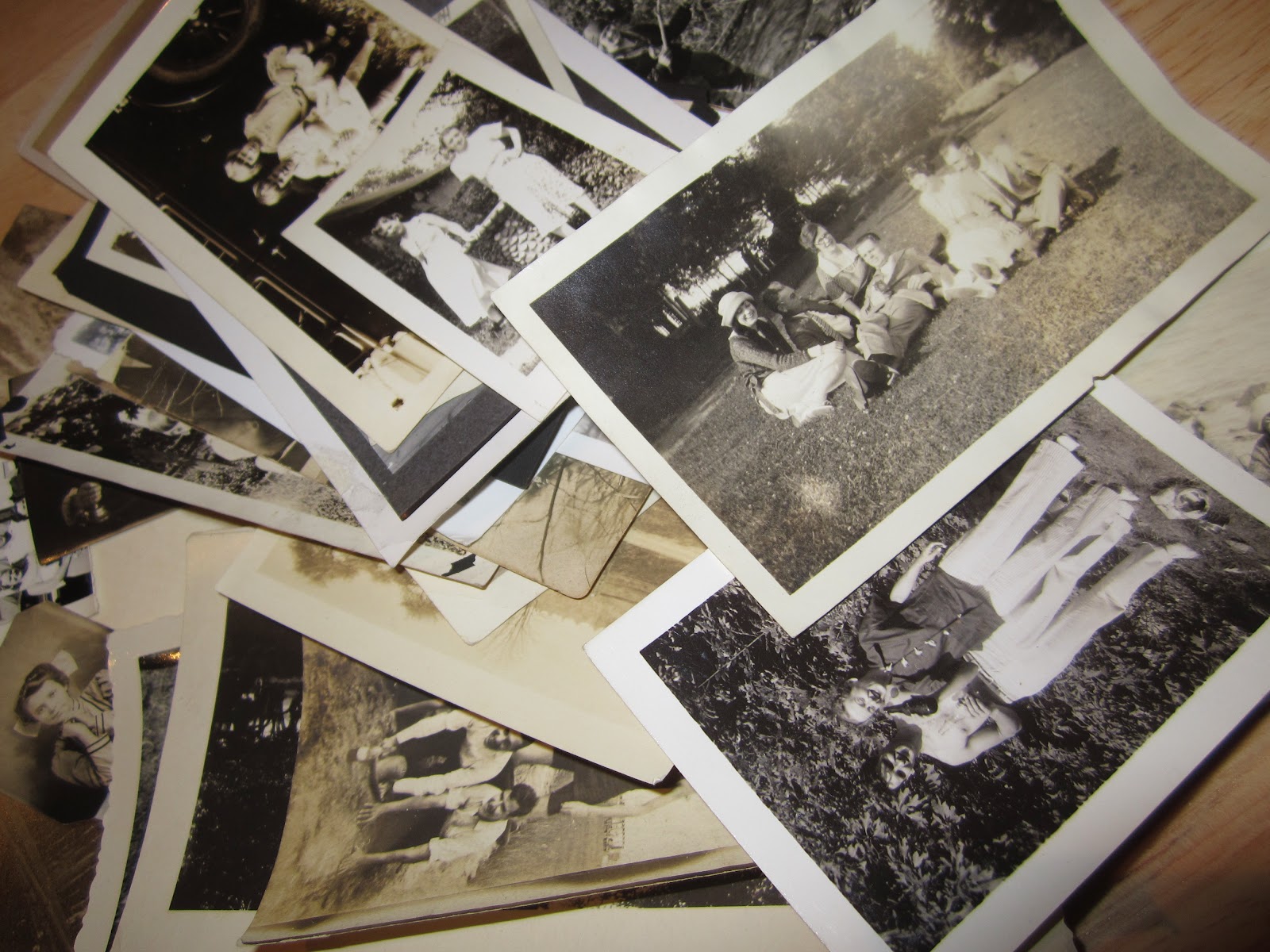 And finally, I indulged in a big stack of photographs, both some of the more formal shots, but mainly snapshots.  I don't remember seeing such a selection of casual photos before, and I absolutely love them.  I usually think of people in old photos being stodgy and serious, but check out some of these great pics: 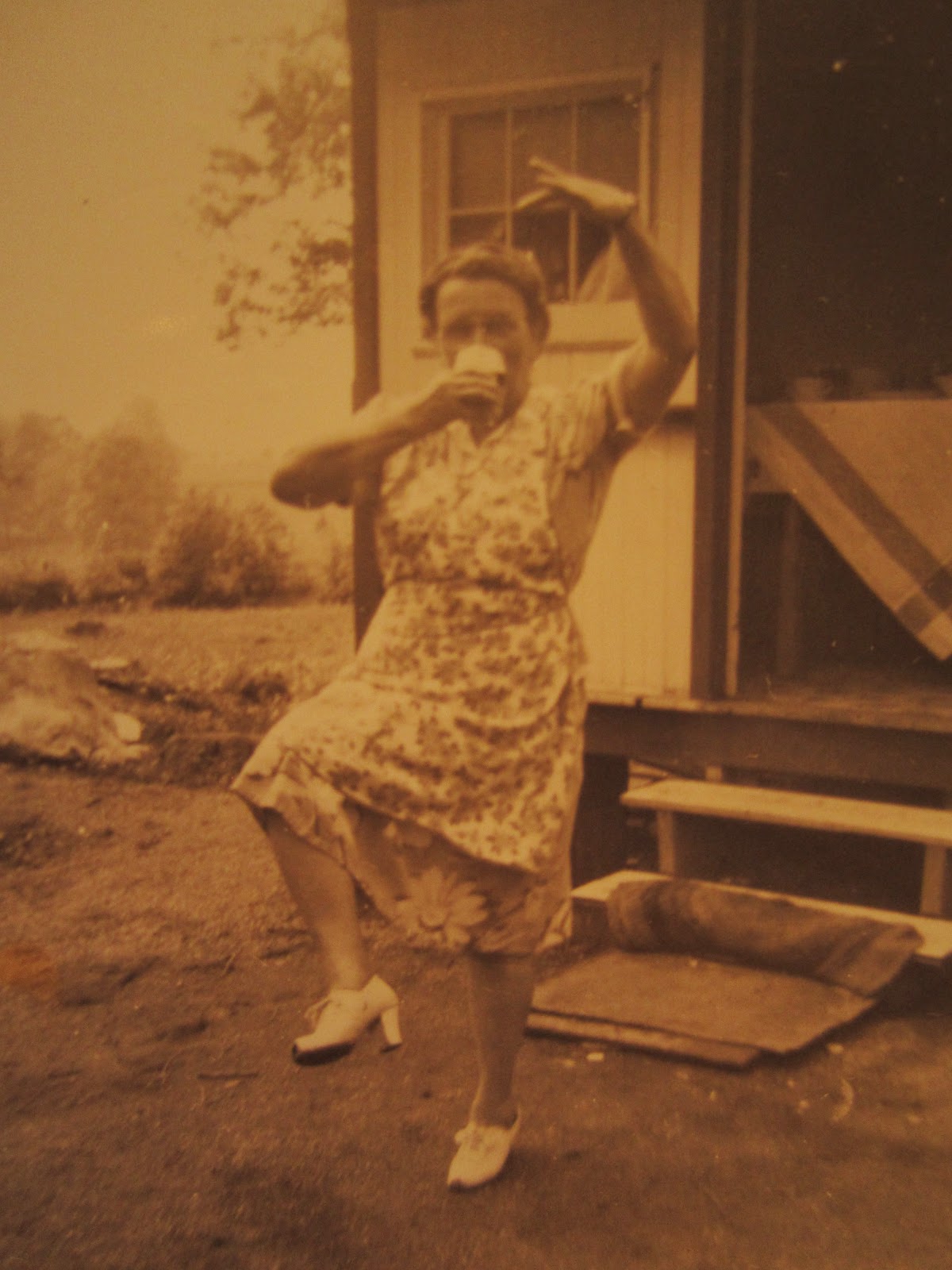 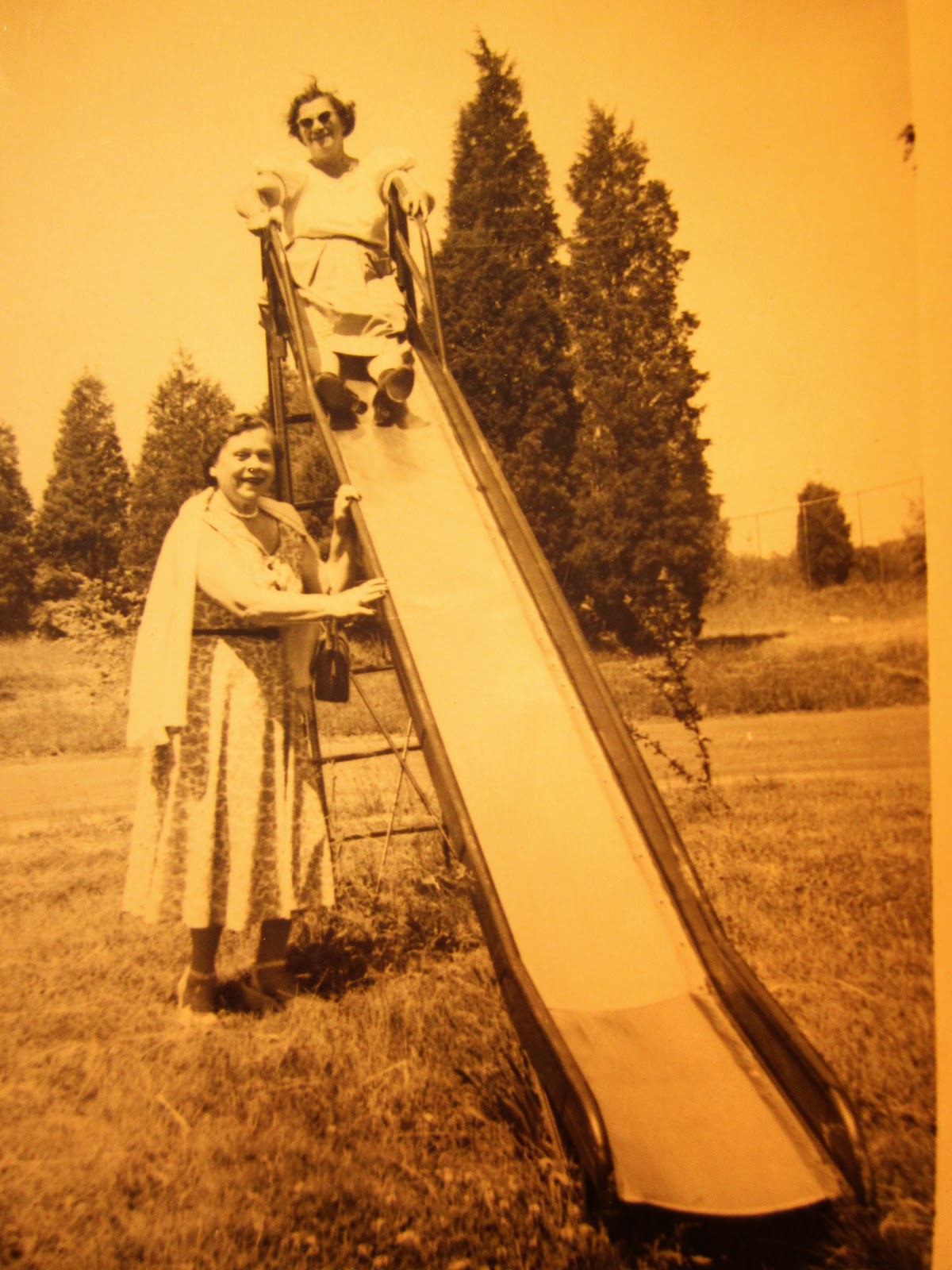 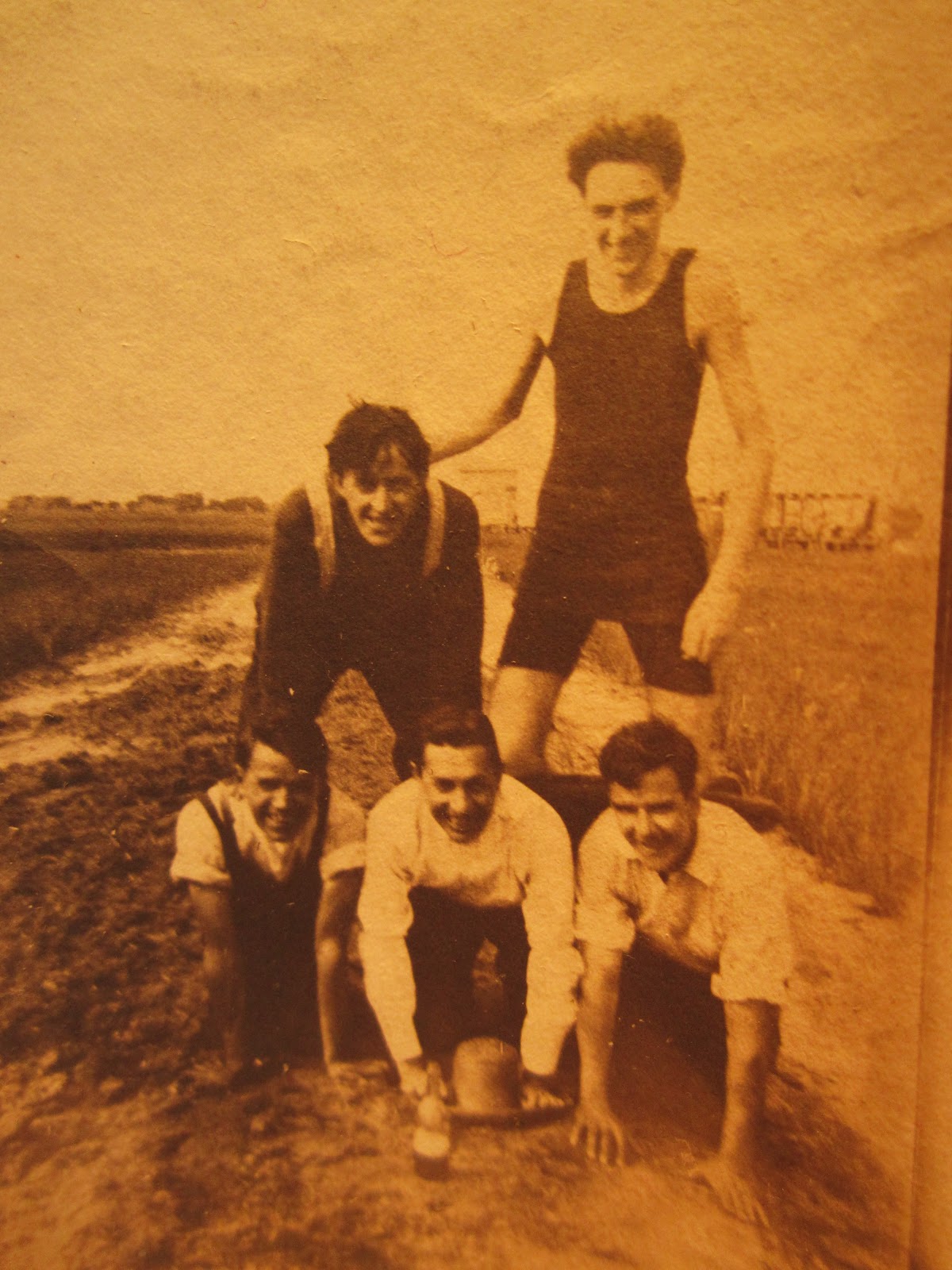 I am going to do a separate post to show you some more images from the photographs I found, because they are truly priceless!

So that's the new stash.  What do you think?  What are your favorites here, and what would YOU do with them?
Posted by Andria

I LOVE the receipts and checks and I want them. LOL. And those old snapshots are great too. I am jealous....have fun playing with everything...

You sure found some treasures there! I adore those old pictures....

Loved seeing your treasures, especially the old photos. But anytime anyone mentions ephemera, my ears perk up! So fun!

I enjoyed both these posts. You are a talented treasure hunter - fab loot!

I am so envious of these paper shows. I wish there was something like that over here. There are things like collectors fairs, but they usually have very expensive stuff that I wouldn't use for my collages. You sure got some wonderful finds, you lucky person you.