Last Saturday, we celebrated my older daughter's sixth birthday with an Octonauts-themed birthday party.  The Octonauts is one of Katy's current cartoon favorites, because for years she has been in love with sea creatures, and the program takes place under the sea.  A team of animals--a cat, a polar bear, a rabbit, an octopus, etc.--live aboard the Octopod and ride around in vehicles called GUPS, offering medical care and rescue to ocean creatures in need.

Because Katy had a sea creature theme for her last birthday party, adding a few Octonaut-specific details was no problem; mostly it was the same party all over again! 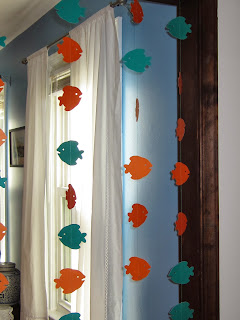 I made the happy decision to skip the crepe paper streamers this time around, and instead I sewed together die-cut fish from the parent/teacher store to make garlands for the doorways.

A total of eight children came to the party, including my own two.  What a perfect number!  It felt less like a stressful party, and more like a comfortably large play date.  When the girls first arrived, they settled down to a pile of Octonaut coloring and activity pages, which I was able to print out from Octonauts.com and 1plus1plus1plus1equals1.net. 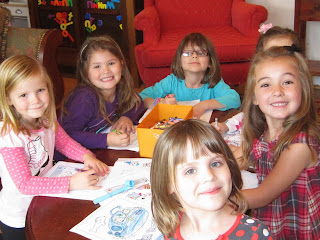 Then we moved onto a craft:  We made paper plate fish that we decorated with markers and stickers.  I laid a vinyl tablecloth on the living room floor, and let the girls work together in the sunshine: 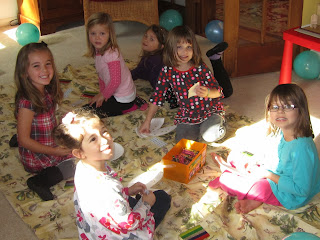 I didn't take a picture of our fish, so here is an example I found online:
When it was time for games, we played Captain Barnacles Says (like Simon Says, but renamed for the main character of the Octonauts).  I started out as the leader, and then each of the girls took a turn.  We also played Pass the Tweak (a version of Hot Potato, using my younger daughter's stuffed bunny).  A "fan favorite," though, was Pin the Eye Patch on Kwazii.  I used a picture from Etsy to make my own Kwazii poster, and cut eye patches from black construction paper.  I had a paper mask to cover their eyes from a Pin the Tail game we played earlier this year, but you could cover the kids' eyes with a scarf instead.  I put the girls' names on their eye patches on little round stickers so they could see who got closest. 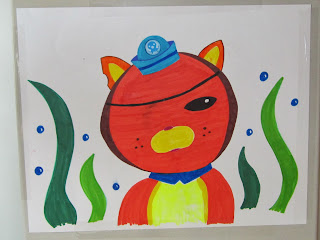 Finally, we played a fishing game.  I put paper fish numbered with 1s, 2s, or 3s into a children's wading pool with paper clips attached.  The girls all used a fishing pole with a magnet attached to draw out a fish.  Then they could get a party favor from the bag labeled with the same number as the number on their fish.
I borrowed a fun little treasure chest from a friend to store the favor bags. 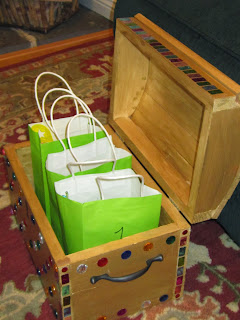 I set out some munchies, like a  bowl of goldfish crackers and Swedish fish, and a bit of a sea-themed tablescape in the kitchen. 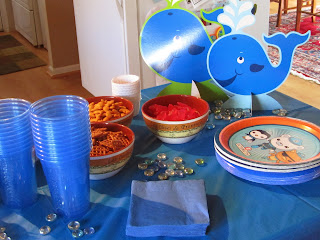 I also made a fun dessert to serve with the kids' lunch.  The idea apparently came from Martha Stewart, but many folks who've done Octonaut themes for their kids have done something similar.  I made blue jello in little clear cups from the dollar store.  Then I cut a slit in the top of the jello and tucked in Swedish fish to make them look like they are swimming around. 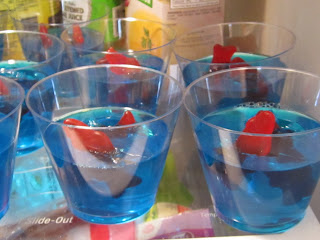 Don't put the fish in too far ahead of time, though.  They get terribly gunky after they've been in there for awhile!  On the rest of their Captain Barnacles plates, the girls found shell pasta, dolphin-shaped cheese sandwiches (made with a cookie cutter) and "fish eyes" (grapes). 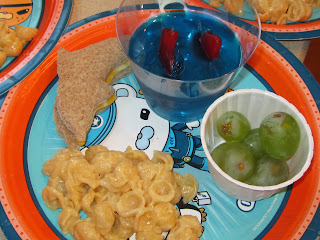 Some people put more time and thought into the cake than any other part of the event, but I admit that for us, it got the least attention.  I didn't even order enough in advance to get a theme-appropriate cake!  But the cake had balloons, and absolutely delicious frosting, so I was content.  I always serve the little ice cream cups sold in the freezer section of the grocery store to avoid the mess of trying to scoop out ice cream next to the cake. 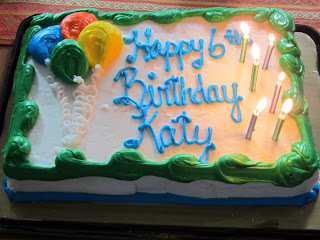 Back to the vinyl tablecloth on the floor, the girls seemed pretty happy with the cake and ice cream part of the party! 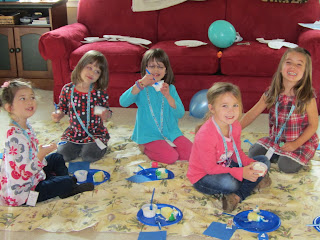 We finished up the party by opening gifts, and sending the girls off with balloons and goody bags. 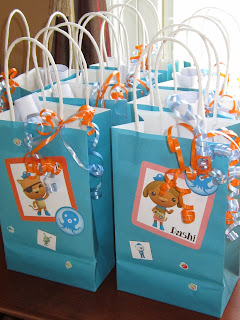 I was able to print out pictures of the Octonaut characters onto adhesive-backed papers to turn them into stickers for the bags.  I used the same sources as for the coloring pages at the beginning of the party.

All in all, it was a very happy birthday party for my little girl! 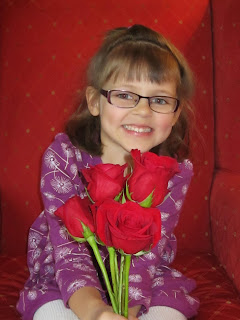 That is so creative! We are going to have a Cinderella party here in a couple weeks, so I'm taking notes.

Love it! What a sweet thoughtful party plan.

I never heard of octonauts, but this looks like a fun party!

It was a great party! Everyone enjoyed the games and the girls all played together so well -- the beauty of 6-year-olds!

Wow, you went all out for this party. What great ideas, and I know your daughter and the other children had to love it. I wish I was there......hee, hee, hee. Linda E.

Looks like a wonderful party with such creative ideas! Your daughter is adorable, love those dimples!

I am sure Katy enjoyed the party. You showed her love by all the special things you did.

Andria, I really enjoyed looking at these pictures. That is a really over the top day for you! I can't believe you got all that activity in and none of the kids crashed and there was no drama! Look at all that great stuff you did for them. That would be a wonderful day for me as a kid. Even to have eight friends! :-)

Andria, I really enjoyed looking at these pictures. That is a really over the top day for you! I can't believe you got all that activity in and none of the kids crashed and there was no drama! Look at all that great stuff you did for them. That would be a wonderful day for me as a kid. Even to have eight friends! :-)

I was able to print out pictures of the Octonaut characters onto adhesive-backed papers to turn them into stickers for the bags. I used the same sources as for the coloring pages at the beginning of the party.
girls black shalwar kameez ,
black shalwar kameez design for girl ,