Our Disney cruise to Alaska gave me 800+ photos and lots of stories to share, so you'll see a bit about it over the next week before I get back into my normal crafty affairs.
Our first excursion from the cruise boat was Scagway, Alaska, a town established during the Gold Rush over a hundred years ago.  In fact, it was known as "the Gateway to the Klondike."
One of the most notable buildings in town, and apparently one of the most photographed, is the Arctic Brotherhood building, or the AB building. 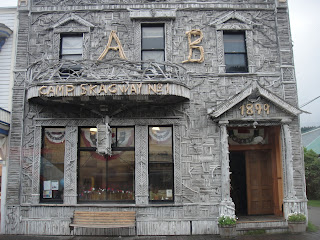 The Arctic Brotherhood was a fraternal order established in 1899 to protect the rights of stampeders.  The hope was to form a more friendly and helpful community.  The building is so famous because it is made up of thousands of pieces of driftwood. 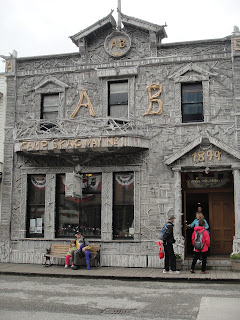 We took a brief trolley tour around town, before boarding a bus and heading up a mountain into Canada.  (I should probably have paid more attention to the names of the mountains we rode up and down, and the rivers we observed!)  Our bus driver told us that the fog on this day was worse than any he had seen in his seven years of driving these tours.  It was so bad that he called the company he works for at the top of the mountain to ask them to cancel the later tour that his wife was scheduled to drive! 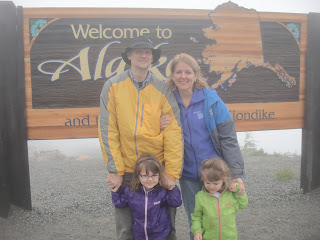 In spite of the fog, we did manage to enjoy the roadside cairns that have been built up by various tourists over the years in the spirit of the Tlingit people who originally inhabited this area. 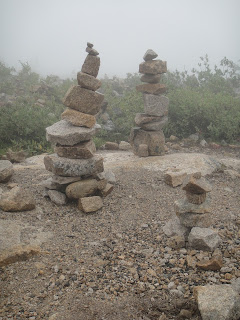 Once we reached British Columbia, Canada, we boarded a train to head back down the mountain along the White Pass &Yukon Route into the United States.  We were amused by the glass case of "emergency tools" that included a saw and axe that seemingly dated back to the days of the gold prospectors. 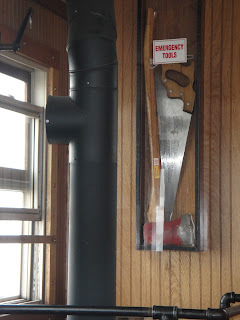 For most of the ride, our view was obscured by the fog.  It added to the mystery of the sights we could see, like the remains of this old bridge. 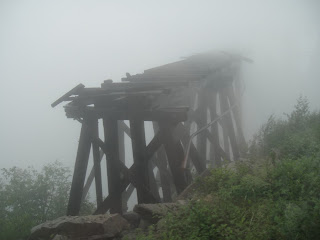 My husband stood on the platform between railroad cars to get this shot of the train stretching out behind us.  If I had been there with him, instead of inside the car with the girls, you know I would have been shouting all kinds of cautions.  But I wasn't there, so he got this great shot! 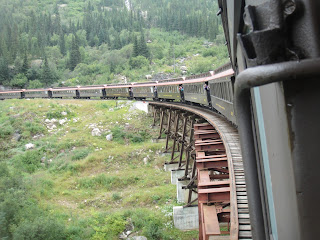 Because of the fog, there wasn't a lot to look at for quite some time, so our three-year-old chose that time to take a little nap.  As we re-entered the US and a customs official boarded to inspect our passports, he demanded that my husband rouse Bayla to prove to him that there was nothing bodily wrong with her.  The woman in the seat behind me was SO indignant; she wanted me to report the man for his self-importance!  We roused her just enough to satisfy him, and she fell promptly back to sleep. 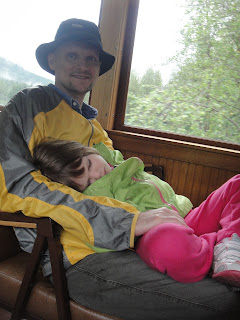 I am always fascinated by bottle trees, a tradition that originates in Africa and was passed along to the southern United States (and obviously the furthest reaches of the states as well!).  I saw this "bottle tree fence" as we took our bus tour through Skagway, and wanted to share it with you. 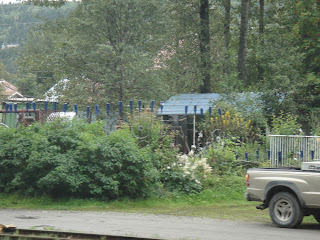 Most of the people who work in Skagway during the summertime come only for the season, and then return to other parts of the US for the rest of the year.  For example, our bus driver spends his winters in Monterey, California, but comes up to Skagway each summer with his wife to conduct tours.  They live in an RV during those summer months.  Many of the summer workers set up tent cities, not unlike the Gold Rush prospectors of history, and we got a chance to peek into one of these areas on our tour: 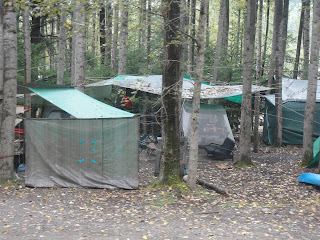 As we poked around town before heading back to our tour bus, I ran across this store window that I just had to commemorate with a photo.  I'm not a big fan of real fur, but it strikes me as appropriate that folks in Alaska would seek out this sort of bikini for their summer fun: 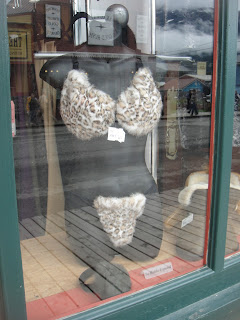 Skagway maintains the same sort of wooden sidewalks that characterized the town during the Gold Rush era.  Now the streets are lined with jewelry stores, and while you can still get a tour at one of the historic brothels, I didn't see any evidence that any of the 80+ brothels from the Gold Rush days are still in operation.  (The sign for tours said something like "$5 for 15 minutes, just like in the old days!") 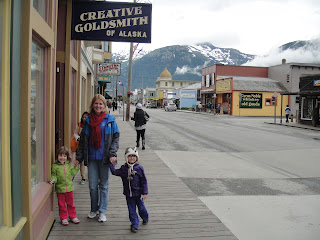 We had a great little excursion to Skagway, Alaska, and then headed back by early afternoon to the Disney Wonder, in time to head off to our next port stop.  Come along with me in the next few days for an account of the rest of the trip! 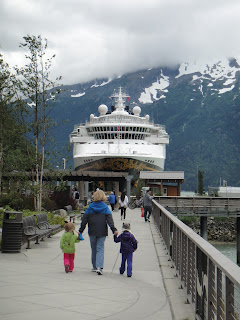 Gotta get me one of them bikinis.

I really love those rock formations. <3

Wow. This is charming and I look forward to seeing Skagway when we cruise Alaska. And we will! These photos are great, with the fog. I love that one your husband took, too. We rode a train in Sedona and I was able to take a picture much like this, but we were standing on a car that was open to the sky, so we could see the red rock all around us.

it seems like you absorbed a lot of history and a real sense of place on your trip. when i was in alaska i had to go buy a copy of white fang and reread it because, before my trip there, that's where i learned most about the area / history!

thanks for your kind words on my blog. you are so right - i am the one who puts so much pressure on myself when it comes to blogging. i hope to "mellow out" a bit so i can enjoy it more.

How wonderful that AB building is! and how funny that fur bikini! Cool vacations Andria, thanks for sharing!!

Oh so beautiful, Alaska seems!
Thank you for sharing these photos.
The snow on those mountain tops, I can not even imagine that right now... we are still having hot days well into the 90's.
Take care. ~xx