Friday night was Date Night, so my husband and I had a fabulous steak dinner before heading to one of our favorite haunts, Briggs Auction.

I had looked online earlier in the day, and saw that there would be an amazing collection of ephemera up for auction--all kinds of postcards, photos, stamps, and ledger books.  I've finally learned, though, that the sort of things I like to bid on go up at the very start of things, at 5 p.m., and we didn't get there until 8 p.m.  Not a piece of ephemera in sight!

While there is no such thing as "too much ephemera," and there may not even be such a thing as "enough ephemera," I wasn't too heartbroken, since I had so many jackpots of late, acquiring a pretty good supply of photos, postcards, postage stamps, and even ledger paper.

I did walk out of there with a couple pieces of art, though.  No one was showing much interest in two framed pencil sketches from 1890, so I jumped in (actually nudged my husband in the ribs to jump in) and got them: 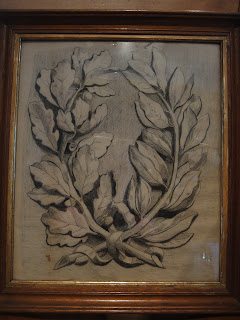 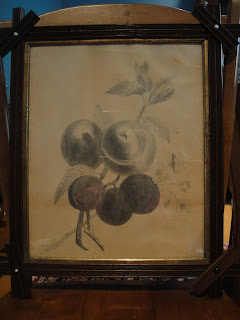 I just love the idea of the artist taking up his pencil back in 1890 and making these drawings that I now own.  I am partial to the first one, and here is what the back tells me: 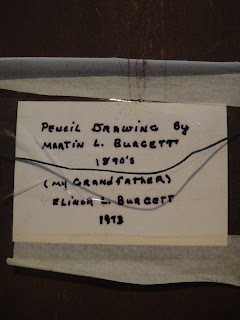 I love how the person writing the label in 1973 includes "my grandfather" in the description...sounds like he or she is proud of Martin L. Burgett and his art!  The second picture has a similar label, but states that the drawing was done specifically in 1890.  I am going to include at least one of them on an Art Wall I have in mind in my workroom, Studio 791.

On Saturday, I headed to the ArtStampScrap Tour spring event, and came away with yet another passel of goodies for my journaling and art-making.  I was interested to see that a good number of the booths were carrying waterbrushes.  Either I just never noticed them before I "discovered" them recently, or everyone is (rightly!) jumping on the waterbrush bandwagon. 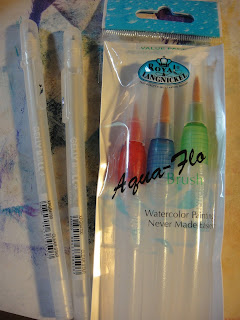 I got a set of three for much less than I pay for one at my local craft store.  I also bought two glitter pens.  Weird for me, I know, but I've already used one, and they have a pretty and surprisingly subtle effect.

One of the thing I am most excited about are these gems (for lack of a better word): 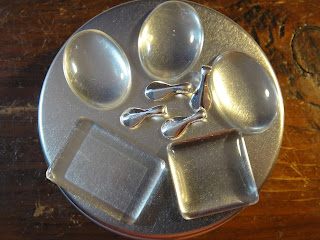 At the booth, they were doing a Make and Take where participants just glued pretty paper to the back of them to create pendants with bails similar to the ones shown here, but I envision creating collages to put on the backs for one-of-a-kind pendants.  Future Etsy product?  Maybe!

And, of course, I couldn't walk away without a whole load of new rubber stamps. 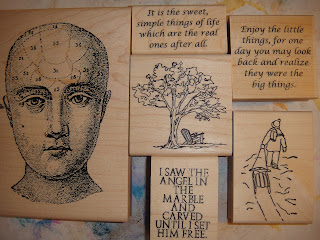 This time I ventured into unmounted stamp terrain.  I had purchased several unmounted stamps, along with acrylic blocks, at an earlier show, but never really used them properly.  I didn't know what I was missing!  I came home on Saturday, and played around with all of my new (and old!) unmounted stamp images with some really fun results. 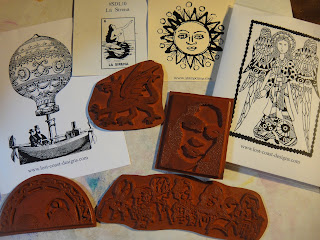 I did one Make and Take, which was a little goodie box that doesn't really fit my style. 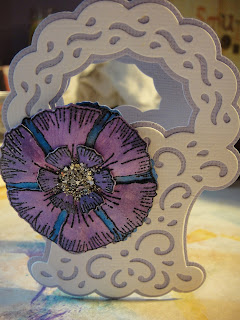 But with the help of Cibele Glazer, I got to use some of the Faber Castell Gelatos.  They are described as "creamy color sticks," or, as Cibele put it, "lipstick" for your paper!  They are really fun to use for blending: 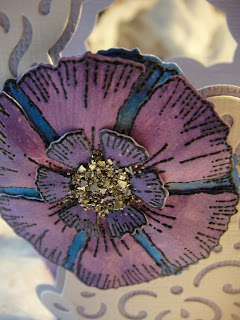 Now I have some pictures to hang, some rubber stamps to use, some pendants to make, some index cards to create...I think I have plenty to keep me busy for quite some time!

Annnnndria, I got your awesome postcard!! :-) I'll respond soon, love. Also, these are great finds! Love everything, especially the purple!

good stuff! (how did we ever live without water brushes?)
the inscription on the back of that drawing just slays me.
I just picked up an old book at a rummage sale that was inscribed "this book was a Christmas gift from my brother Tim, 1958." I love that so much.

wow - what a haul! i have one of those watercolor brushes and have worn it out but i didn't know they came in different sizes and sets of three. :-) i love all the unique stamps you got and can imagine all kinds of ways to use them.

Oh my... WHAT FUN!!
A dinner date with hubby, a painting, art supplies (watercolor brushes), and rubber stamps. Lucky gal. :]
Those brushes are FANTASTIC, right?!
Looks like a wonderful collection of stamps too, enjoy. I know you will!!
Take care.

What fun! We don't seem to have auctions here in SF....but I guess you better go early next time and eat afterwards.