Over this past year, I participated in my first Art Journal Round Robin (AJRR) with Janet, Mary, and Danielle.  Mary and I noticed when we received our original art journals back that we were two spreads short from one another, so we decided to do one additional swap.  I thought I would share with you the two spreads I created for her.  Both were heavily influenced by Pinterest pins on my Art Journaling board.  After all, there's not much point in the pinning if we don't find a way to put them to good use! 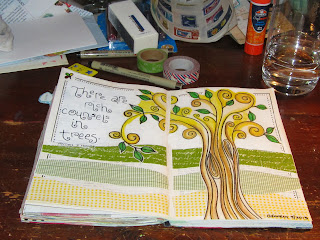 I created the first spread after seeing Val Hebert's swirly tree on a pin from Flickr. 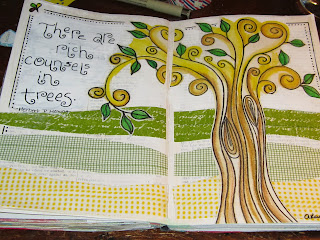 I glued book pages to the journal, then covered over them with white gesso.  I used decorative tapes for the lines at the bottom of the spread.  I drew the tree with a Micron pen on a separate piece of white paper, and then cut it out to adhere it on top of the tape lines.  Then I drew in the border and the quotation.  I added color with Derwent watercolor pencil.  I really like how it turned out, and thank Val for her lovely and inspirational design! 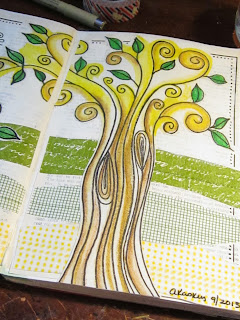 For the second spread, I followed the lead of Amy Powers from Inspire Co.  I never found the source of the photo on her blog, but you can see the pin here. 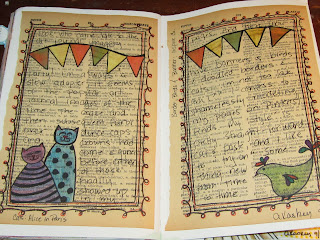 For my version, I adhered vintage dictionary pages to the journal, then used a Micron pen to doodle the borders, the animals, and the writing. 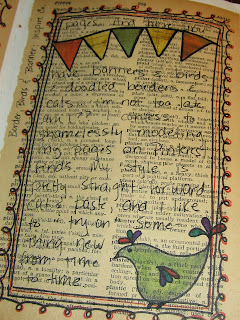 I used Derwent Inktense watercolor pencils to add color to the animals, Sharpie pen to add color to the border, and triangular pieces of paper to add colors to the pennants.  The bird followed Amy's design, and the cats were drawn following the example of Shelagh Duffet, known as Alice in Paris on Etsy. 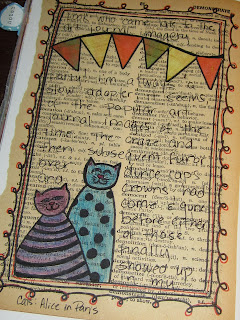 Many thanks to Amy and Shelagh, whose creativity made this spread possible!

I enjoy using Pinterest as a source of inspirations and designs for my art journaling, and for craft projects in general.  I think I've mentioned before that I feel more justified in how much time I spend there if I actually make use of the resources I pin!  It truly is an endless source of ideas and eye candy.  You can find my Pinterest board for Art Journaling ideas here.

Oh how I love your swirly tree! So whimsical and free.

LOVE the swirly tree spread and the fact that you actually used your Pinterest inspiration.

The second spread is so cute and the kitties are my favorite...maybe because I have two of them.

Love how your spreads came out. I use a lot of the same supplies, but your pages are more beautiful! {:-D

I love both of these.
They have a great graphic quality.
Rinda

Both pages are simply darling!! Love those pages using book papers. That is one of my favorite looks:)

Very sweet pages - I love them all, although they're so different... You gotta love pinterest ;)
Cheers!
Jana (from GIT)

Hi Andria...I see you are done with your spreads. I'm working on yours. I can't wait to see these in person. I love trees!
Mary

Oh wow, these are great! I love the swirly tree, but I love love LOVE the dictionary pages for the background of the other. Very cool! (Here from GiT post...)

I don't have the inktense!! waaaaah!! But I have to save for prismacolor anyway.

I love your doodling!

Beautiful!! I love that tree!! Great job on your journal spreads!