Some of you may recall that I threw one of my first-ever themed kid's parties back in November when my daughter Katy turned four and requested a "Cars" theme.

At the time, my younger daughter Bayla decided that she would have a "Hello Kitty" theme for her own party when she turned three. 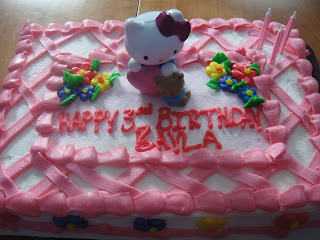 She stuck to that theme for the next three months, and we recently pulled off her "Hello Kitty" theme on a Sunday afternoon.

It meant another trip to Party City for some packaged decorations, along with pink and blue crepe paper.  I also bought a ridiculous number of Hello Kitty stickers, and a variety of favors, like pencils, erasers, and tiny plastic cameras that show Hello Kitty pictures when you look inside.

This time around, we had the party at our house, even though we ended with more kids and parents than we had for Katy's party up at church.  The house was crowded, but ultimately accommodated the big group. 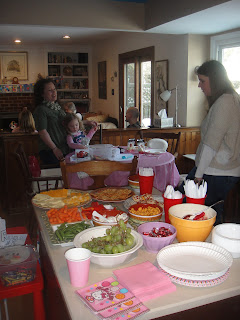 I had Hello Kitty coloring pages and fresh pointy crayons available for the kids at the kitchen table.  They generally seemed much more interested in checking out a few of the girls' toys that my husband brought up from the basement when the boys turned their noses up at the Hello Kitty pics. 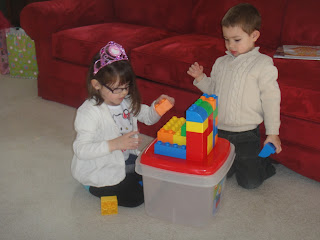 After a little free play time (and time for munchies for the adults), we launched into a rousing game of Pin the Bow on Hello Kitty. 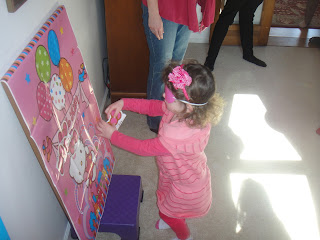 Everyone left with a little gold "Winner" medal for their efforts. 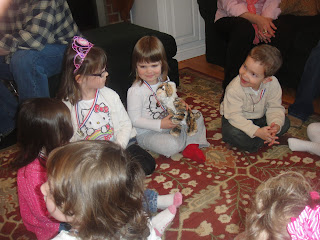 Then we played Hello Kitty Hot Potato, passing around a little stuffed tiger to music.  When the music stopped, whoever was left holding him was the Hot Potato.  From an adult point of view, it was one of the more pointless games (because I thought the kids were too young to be "out", so I just yelled "hot potato!" and the tiger continued his journey around the circle), and yet it seemed to be a fan-favorite with the three-year-old set. 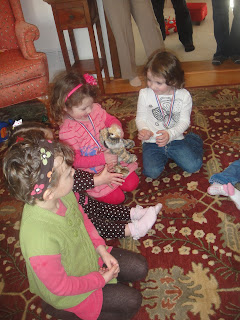 Next, we did a ball toss into a big "kitten basket". Other than putting a masking tape line on the ground for the kids to stand behind, I neglected to establish any hard and fast rules. But the kids seemed to like it, because I stuck a Hello Kitty sticker on their shirts every time their ball landed in the basket. 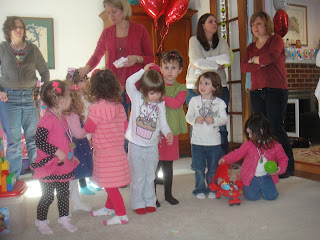 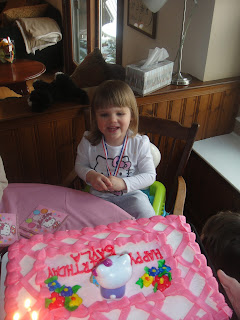 Next came the cake and ice cream, with a Hello Kitty themed cake from the local grocery store.
Finally, we opened gifts.  I asked my mom to help me keep track of which guest brought which present, which is much more challenging than one might think when a group of three-year-olds is "helping" pass the presents, open the cards, and empty the bags at the same time! 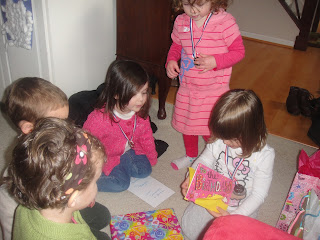 Bayla got a great assortment of puzzles, books, activity books, dolls, and even a purple feather boa and tutu!

The party seemed to move much more quickly than Katy's had, and there wasn't really much time for additional games after the gift-opening.  We sent the kids home with a heart-shaped helium balloon and a goody bag.

Bayla had a ball celebrating her birthday in the "traditional way," with food, games, cake, gifts, and friends.

We held the party a week before her actual birthday, which is today. I've been spending a lot of time over the past couple of weeks, looking at photos of Bayla when she was new to our family.  Here are a couple of favorites I want to share with you:

Very cute baby and family, where do you live? I like the green scenery of your area.

looks like a lot of fun for all!!! i am helping my sister plan a "dance party" for her four-year-old next month. bayla is such a cutie and i'm sure you are looking forward to all that the coming year will bring.

Boy, time does fly by... doesn't it?!
Happy Birthday, sweet little one :]
The party looks great, Andria.
Thank you for sharing.

These are sweet photos and your party was wonderful! I sure do miss those days of themed parties. Too fun!!!

Andria...I have been so inspired by your work lately...that is one of the reasons I started doodling. Thank you!!

What a wonderful sounding (and looking) birthday party. Love the name of your daughter... a totally new name to me... and very impressed with all the heloo kitty stuff and activities :)

Oh I live these pics of the kids at party. I bet when the hot potato game was going on there was wiggling and giggling and a holler or two!! That cake was fabbo!!

Listen. Will you throw my 56th birthday party??! Alice in Wonderland, please!!

Ha ha, Chris! It would be lovely to arrange an Alice in Wonderland party for you. Did you see the article in Mingle (I think it was) about a party with that theme?