It's the most wonderful time of the year!

But it seems to be going on and on and on and on.  I guess that's what happens when Christmas festivities get started right after Thanksgiving, and keep up for the full month of December.  I even had a brief moment the other morning when I thought that Christmas had already happened!  Who could blame me really, when I've already watched Santa "arrive" in a nearby town, "had lunch" with him at my daughter's school, watched two musical programs by my children's classes, prepared for two parties for my children's classes, participated in the church's Christmas pageant, and wrapped and shipped off Christmas presents to my family members who will be in other parts of the country over the holiday.  You mean, it's not over yet??

But there have been some fun postal-themed elements to our holiday this year that I want to share with you.  First, at my daughter's school, they each got to write letters to Santa and post them right to the North Pole:

That's Bayla, not losing one lick on her candy cane, getting her Christmas wishes off to the Big Guy himself. 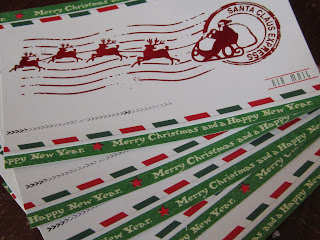 Opening our own mailbox each day to find Christmas cards and family photo postcards is one of the many highlights of the season.  At a local store, I found greeting cards for sending money as gifts; they had a fun postal motif, so I turned them into postcards for some of my mail art friends. 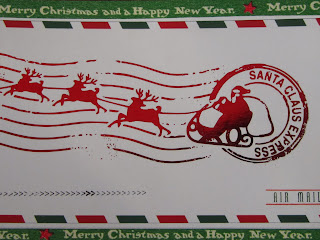 A little bit of festive decorative tape and a postcard back, and they were ready to make their way across the country!

When I picked up napkins for my daughter's classroom Christmas party, I loved the postal-theme on them, as well. 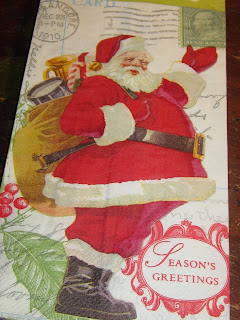 After unwrapping one fully, I adhered it to a white paper backing with gel medium, and I know that I'll be using the extras for some fun projects; I love the overall design! 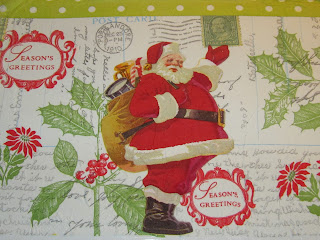 Some other holiday postcards were created from random catalog photos and my Dymo label maker: 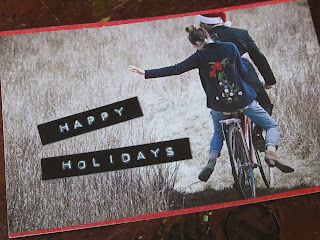 My six-year-old daughter has been "wowing" me with her creativity this holiday season.  We have done Advent calendars every year since her birth, so she's very familiar with the concept.  She found a box lid lying around during package wrapping, and decided to create her own Advent calendar. 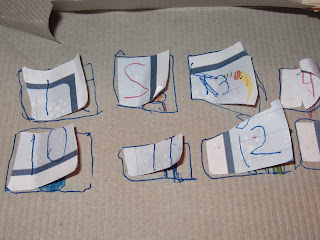 She glued down little flaps with numbers for each day, and drew a Christmas-themed picture behind each one.  Here's little glimpse of a star, a manger, Mary, and a donkey: 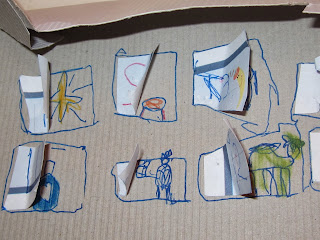 They aren't necessarily pretty, per se, but I thought her idea for constructing the calendar was quite clever!

She also found some peg clothespins in our craft stash and decided, completely unprompted by me, to create her own nativity scene.  She presented it to me when she was finished by setting it up in front of a nativity in our bedroom: 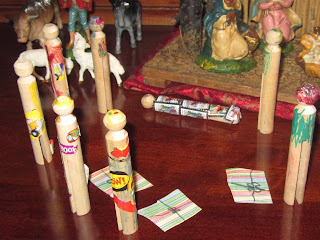 Notice Baby Jesus, lying at the back, and the gifts lying in front of each of the three wise men.  Again, perhaps not the most glamorous of execution (note the stickers that say "Pow!" and "Vroom!" on the wise men), but I was impressed by her initiative and creativity in completing the project!

I am feeling a major need to take this last week before Christmas to really refocus on the true meaning of the holiday.  I've had enough Santa, enough candy canes, enough gift wrapping and "Jingle Bells."  It's time to settle myself down and really prepare my heart for this celebration of the great gift of Jesus, born into this world to be our Savior.

However you are spending this holiday season, I hope that it is filled with joy, health, contentment, and creativity....happy holidays!

That's lovely! We do love the way you recycled some old catalogs to make this original postcards. We are happy about the results you achieved with our Dymo label maker. Keep up with the good work! ^CP

You sure had me laughing when you wrote you woke up and thought Christmas was already over! So funny. It does go on and on too long but I loved your postal themed cards inspired by the thrift shop -- very cool. And loved your girl mailing the letter to Santa too. Happy Holiday (and hang in there)

I love the postal themed Christmas napkin - you find the cutest things! Also, the "Pow" and "Vroom" on the three wisemen is just precious!

Here's wishing you a Merry and Bright Christmas...I hope to be in Blogland more this New Year!!!
Hugs, mary

Aw, your daughters are creative just like mama :-)
Have a lovely Christmas xx

Okay, that girl is CREATIVE!! That Nativity scene is awesome! I love that advent calendar!