What I've Been Reading

I am continuing to make progress on my reading goals for 2013.  Not only am I chipping away at the list I created at the beginning of the year, but I am also delving into some other titles from my bookshelves and the local libary.  It is the beginning of March, and I've already read 11 books (though as you will read, below, two of them were quite short).

On the up-side, I have been thrilled to get back into reading, which was my #1 past-time during my entire childhood, but difficult to sustain during my teaching career and while my children were babies.

On the down-side, keeping my nose in a book whenever I have free time means spending less time on other pursuits--crafting, art journaling, and the like.  We all have to make choices about how we spend our time, and I feel as though reading is bringing me an overall better balance.

But with much less blog fodder or interesting photographs!

Here are the books I've been reading since I last checked in: 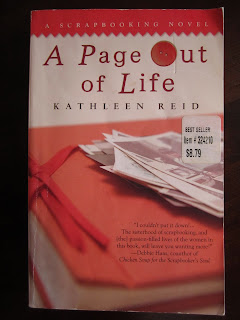 A Page Out of Life, by Kathleen Reid.
I bought this from a library sale, expecting it to be a light read.  Confirmed.  It was definitely enjoyable, but not a life-changing reading experience.  But I think it's good to read that kind of book once in a while!  The chapters alternate among the stories of Ashley, a mother of four whose marriage is falling apart; Tara, a single graduate student who is getting too closely involved with her dissertation advisor; and Libby, an older woman who must cope with her son's ethical transgressions and legal battles.  The women come together, along with several others, in a scrapbooking group, during which their lives become intertwined in interesting (and in some cases, belief-stretching) ways. 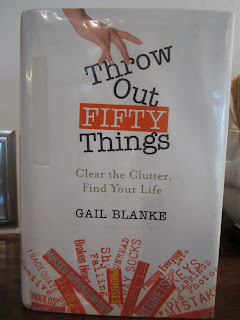 Throw Out Fifty Things:  Clear the Clutter, Find Your Life, by Gail Blanke
A few years ago, I seriously considered becoming a professional organizer; then I started crafting and blogging in earnest instead!  But I still love reading books and articles about decluttering and organizing.  This book by Gail Blanke begins as an organizing book, then turns into a self-help book; she starts out helping you purge your material things and then moves into helping you purge limiting and damaging states of mind.  Part one discusses the physical "stuff" in each major room of the house; part two covers professional clutter in your office; part three is about attacking the mental mess; and part four focuses on taking advantage of all this new clarity.  I liked Gail's approach, because she throws out things along with you, explaining how she is going through the process as she encourages you to go through it, too. 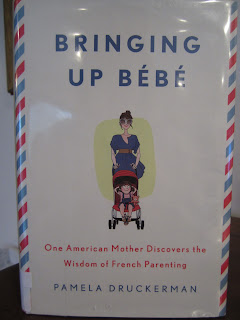 Bringing Up Bebe:  One American Mother Discovers
the Wisdom of French Parenting, by Pamela Druckerman
My moms' group book club was reading this book, and a friend of mine recommended it to me specifically because she said that many of the things she was reading in the book sounded like things I mentioned to her that I do in my parenting.  So true, even though I'm a stay-at-home mom while many of the Parisian women Druckerman profiles go back to work when their children are young, putting their kids in full-time child care.

Some examples of parenting practices I could identify with:  engaging "the Pause" to encourage children to "do their nights;" teaching children to wait, especially when it comes to eating; not snacking all day; building self-control and patience; helping children to stop expecting to get what they want immediately, giving children time to explore and play, instead of pushing for early achievement before all the other kids (that one came hard to me, with the birth of my second daughter; she gave me a healthier perspective on such things!), speaking to children as human beings and listening to their reasons and to what they have to say, giving them a framework within which to live, with as much freedom inside that framework as possible, having a relationship in which the parent is the authority and makes the decisions, having a  "no" that means something to the children (most days at least, haha).

I enjoyed the book, perhaps because it outlined parenting philosophies that were so similar to my own.  It also got me off my duff to start giving my children more vegetables and other foods that they NEED to be eating, rather than shying away from the foods that they have been resisting.  That is one area in which I have been dropping the ball of authoritative parenting.  I started seeing positive results in their eating habits almost immediately, and I'm thrilled with the progress we've made in a few short weeks!  "We are a family that eats vegetables!" is my new mealtime mantra! 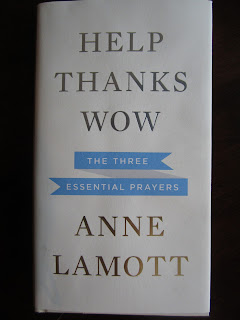 Help Thanks Wow:  The Three Essential Prayers, by Anne Lamott.
I am a huge Anne Lamott, particularly of her non-fiction.  I purchased the book when she came to a local church to give a reading from it.  It is a very short book, just 102 pages, and reads like the Cliff Notes of her much more thought-provoking and enjoyable Traveling Mercies and Plan B:  Further Thoughts on Faith.  She basically writes about her beliefs without providing a lot of the stories and commentaries that make her other books such enjoyable reading.  I wouldn't recommend it to an Anne Lamott-newbie because I don't think the book would make you want to read more of her work, and I wouldn't recommend it to an Anne Lamott-fan because it doesn't add much to what you would have read already.  It does help to round out my Anne Lamott library, though! 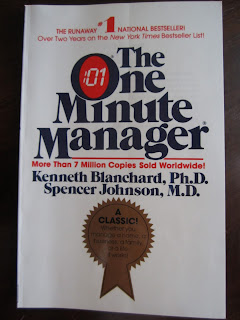 The One Minute Manager, Kenneth Blanchard and Spencer Johnson.
Another short book, only 106 pages, with big fonts and enormous margins.  (It kind of looks like I'm padding my 2013 reading list with these light weights, but it's not on purpose!)  I saw this on our bookshelf, and since I am such a fan of organizing and time management books, I thought I should give it a read.  You can finish it in an hour or two.

It tells the story of a young man looking for an effective manager, and talking to three employees of a particular company who shed light on their own effective manager's management style.  He is neither autocratic nor democratic, tough nor nice.  But he does help his employees feel good about themselves, which makes them produce better results.  He does this by helping them set clearly articulated goals, and then offering them praise or reprimands based on their performance towards these goals.  People know their responsibilities and what they are accountable for.  They are told clearly what they are doing well and what they are doing poorly.  He believes in "catching people doing something right."    But when he needs to, he issues reprimands that clearly express what has been done poorly, and how it makes him feel, and then makes a statement to specify clearly that the behavior is being critiqued, not the person.

Over simplistic perhaps, a little cheesy definitely, but it made me think about areas in my own life that would benefit from some clear-cut goals and expectations toward reaching them, along with my own praises and reprimands for dragging my feet! 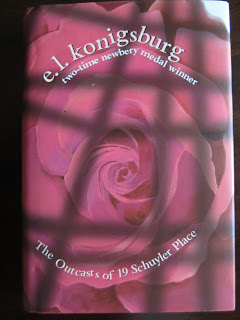 The Outcasts of 19 Schuyler Place, by E.L.Konigsburg.
I've been a HUGE fan of Konigsburg since elementary school, including such books as Jennifer, Hecate, Macbeth, William McKinley, and Me, Elizabeth; From the Mixed-Up Files of Mrs. Basil E. Frankweiler, and A Proud Taste for Scarlet and Miniver.  I enjoy her children's and young adult novels as much now as a grown up as I did when I was younger!  Her characters are always clever, intelligent, and quirky.  They always go against the grain and stand up for what they believe in.  In this book, Margaret Rose works to save three giant towers that her uncles have been constructing in their backyard for forty-five years, using scrap metal and shards of glass and porcelain.  The city council is trying to have them destroyed because their unusual appearance threatens property values.  But to Margaret and the band of activists she forms to save them, they are masterpieces of Outsider Art.
Not only did I love the plot and characterization as I always do in a Konigsburg novel, but I enjoyed the underlying theme of folk art and art appreciation and preservation.  (I will admit that the "solution" at the end didn't exactly satisfy me, but I guess it counts as a "win" for Margaret and her uncles!)

Love your reading list, its to funny my daughters boyfriend just finished re reading the Great Gasby and we were talking about it yesterday

Like you, I have been reading more this year, which necessarily means sewing/creating a bit less. And definitely fewer blog pictures!
I read "Happier at Home" a couple of weeks back, thanks to your recommendation & will check out some you have mentioned here, so keep 'em coming!!

I haven't read any of the books you mentioned here, but Gail Blanke's book is on my wish list now. I am also an Ann Lamott fan, both fiction and non fiction.

Ooh these look great! I think we must have the same reading taste. I highly recommend Frances and Bernard, by Carlene Bauer... sort of a literary romance based on truth.