The Choice is Clear

I've been making several postcards as thank-yous and swaps, and have turned to a new art material I haven't used before:  transparency film.

Years ago, I purchased a transparency sheet filled with photos of girls with fairy wings from Art Chix Studio, but had never used it.  As I was preparing a postcard for Kym from Bliss Artworks, I decided to incorporate one of the images.  Stitching it to my postcard was the obvious choice, since I assume any sort of adhesive would show through from the back. 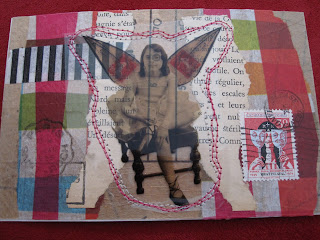 I had glued pieces from a sewing pattern as well as decorative tissue paper to a piece of cardstock, then added text pages and the transparency image, which I sewed around with my machine using two colors of thread.  Then I added a postage stamp and some postal rubber stamp impressions, and the postcard was complete.  Something about the playfulness and colorfulness "spoke to me" as appropriate for Kym. 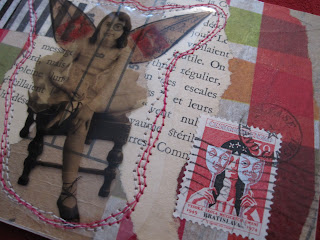 At the same time, I was working on a postcard for a one-to-one swap with F.M. of La Wendula.  I chose a face from my files that was already on a transparency. 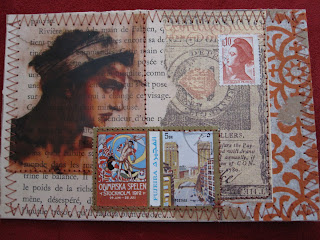 This postcard was also built on a foundation of sewing pattern tissue, but I covered it over with text, a reproduction of historical money, and other decorative tissue paper, rubbed away a bit for a weathered look.  I added two postage stamps (one of which looked like an uncanny mirror image of the transparency image!), and stitched around the elements with a couple different stitches. 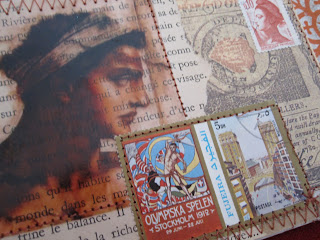 F.M. noted that I had used her preferred color palette of neutral tones.  She also shared my postcard, along with the beautiful example of her artwork that she sent to me, on her Flickr site, here.

Finally, I sent a thank-you postcard to Seth, at The Altered Page, and once again went the transparency route.  This time, I chose a magazine image from my files and printed it out on my own onto 3M transparency film. 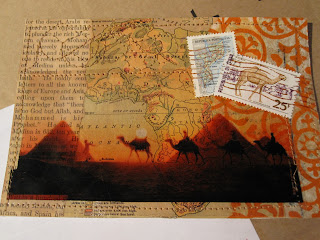 This also was built on a background of sewing pattern tissue, but I glued a section from an old Compton's Encyclopedia about "Mohammadens" (which shows you the age of the book, as they would today be referred to as "Muslims"), a small map of Africa, and some decorative tissue paper.  I stitched the transparency of camels walking by pyramids right over the top of these elements, adding additional decorative stitching that made me think of random footprints in the sand. 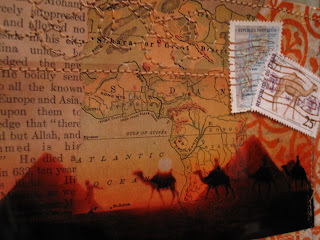 I added two African postage stamps--one a map and one a camel--to complete the thematic postcard.

I love how the transparency film adds an additional image to a piece, but allows whatever is underneath to show through.  It adds almost a mysterious or ethereal quality to the work.  And it feeds my love of stitching paper besides!

These are such lovely postcards, Andria!
Thank you for sharing all your wonderful talent, inspiration, and love for art.
I ALWAYS, adore visiting your blog... I can "feel" your creativity and excitement!! :]

These are great postcards Andria. You make such wonderfully imaginative things and use a great array of materials. You never fail to inspire!

Your postcards are beautiful, as usual. I still have a transparent self portrait somewhere. Maybe I should stitch it onto something...;-)

You make such incredibly beautiful art! These postcards are fantastic.

Andria, these are so warm and lovely I got tears in my eyes. And it wasn't the cleaning chemicals from the office because that happened hours ago. Transparency film! I've never used that! And pattern tissue! Come ON. I have these on my list, now. It's a long list, but I'm going to get to it!

i love how you pull stitching into your paperwork -- it gives your pieces such dimension & texture!

Loving the combination of stitching and transparency film, such a wonderful idea. The postcard mail art is fabulous, so many details to explore!

All of your cards are awesome! I especially appreciate the one you made for me. It is so cool. The stitching and transparency film was a great idea. The card you so generously made for me will hold a special spot in my new art mail collection! Thank you so much! Hugs and happy holidays.

I think this is an informative post and it is very useful and knowledgeable. Pictaram and the other pages describe themselves as 'Online Instagram Posts viewer', which operates through the Instagram API.